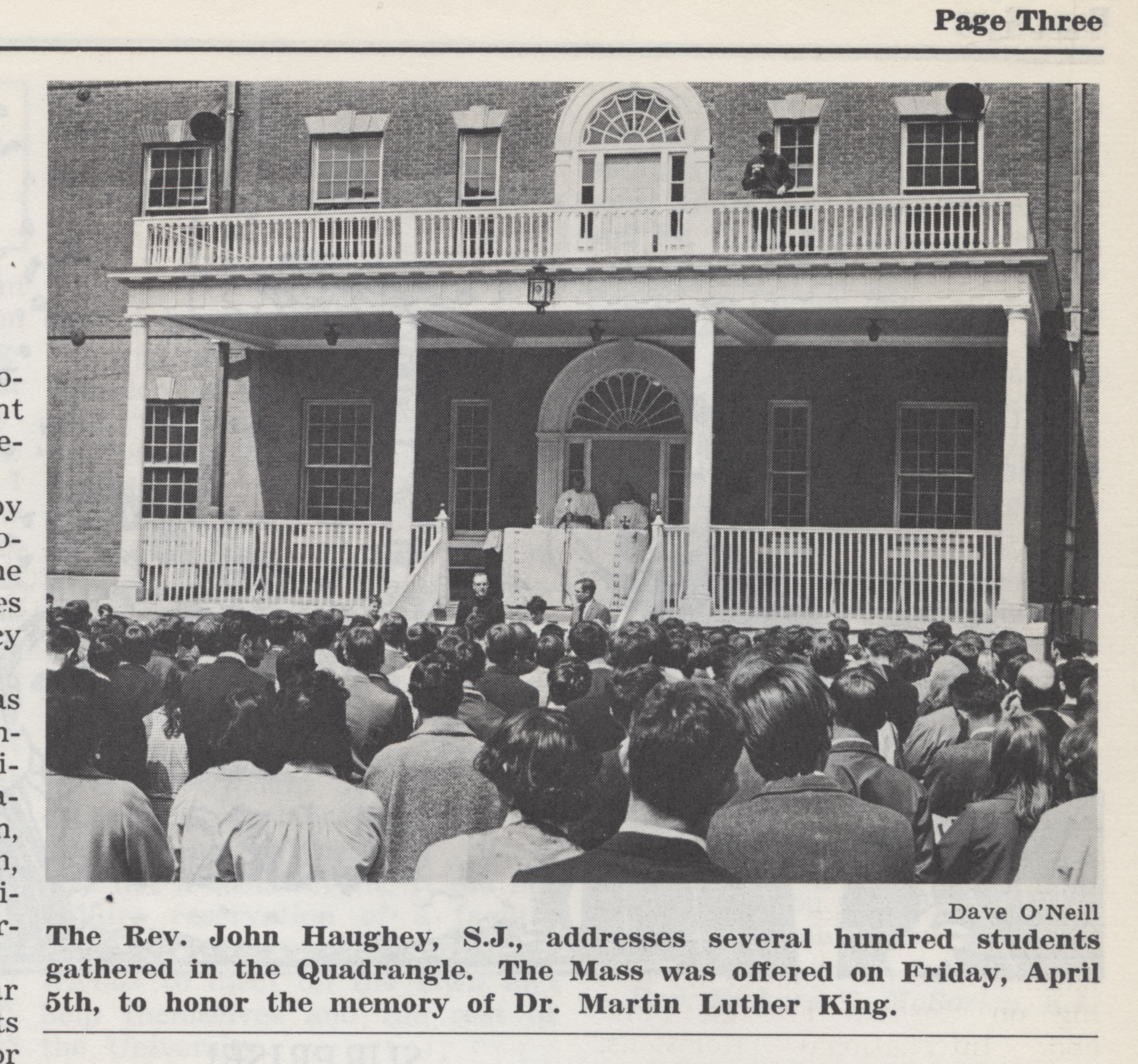 WGTB switches from an AM to a FM station

Don Cadle, a former Yale and Oxford crew member, volunteers as head Crew Coach in March. He coaches until 1964 when he moves to Germany to enter his family’s textile business. However, he stays in contact with the crew teams, phoning after races to learn the results, and even sending uniforms

Dr. Patricia Rueckel is appointed to fill the newly created position of Dean of Women.

University purchases Halcyon House (3406 Prospect Street) for use as a women’s residence hall because of the increasing number of women students. The completion of Darnall as a women’s dorm makes ownership unnecessary and the house is sold in 1966

Kober-Cogan serves as the University’s first coed dorm starting in the fall. Women are housed on the top floors, while medical residents who are all men occupy the second floor

Harry Thomas Campbell becomes the first African American admitted to the College. The College is the last of Georgetown’s schools to integrate

First "Jack" the bulldog arrives on campus in the fall. The students want to name him "Hoya" but he refuses to answer to anything other than "Jack"

University reports that it has 229,000 square feet of fallout shelter space (including 13,000 square feet in Healy Basement) that could accommodate 15,000-20,000 people. This is seen as adequate to take care of all the students and many residents in the Georgetown area

Three Georgetown students, one of whom is African American, are refused service in an Arlington, VA, dinner on February 12. They return with 12 other students the next day and are arrested after a sit-in

50-75 people leave from campus to join the March on Washington. The University declines to sponsor an official Georgetown delegation, August 28

Francis P. Dinneen, S.J. is appointed acting Dean of the Institute of Languages and Linguistics

Georgetown begins a year-long celebration of its 175th anniversary. It adopts Wisdom and Discovery for a Dynamic World as the anniversary theme

Students gather in the Quadrangle on November 22, after news reaches campus of the assassination of President John F. Kennedy for a Mass said by John F. Devine, S.J., Director of the Student Personnel Office, from the porch of Old North

One of The Hoya’s entertainment reporters conducts an interview with The Beatles who are in Washington for their first live concert appearance in the U.S. The interview is printed in the February 20 issue of the newspaper

Gerard J. Campbell, S.J. is appointed President of Georgetown. He serves in this role until 1968

After retiring as President, Edward B. Bunn is appointed as the first (and to this point the only) Chancellor of the University

Georgetown University Community Action Coalition (GUCAC) is established to coordinate various student community service projects. By the fall, it is the largest student group on campus

Walsh Area Women’s Committee and the School of Nursing Student Council award the first Darnall Award. The award, designed to recognize  a woman who successfully combines the role of wife and mother with responsibility to her community, is given to Eunice Shriver. The following year, Dolores Hope, Bob Hope’s wife, receives the award

Group of Georgetown students drives to Selma, Alabama to attend a memorial service for a DC clergyman who has been murdered there in March. The East Campus student Council passes resolutions expressing solidarity with the civil rights movement, setting up an emergency fund to provide support for the students in Alabama, and starting a petition campaign to secure federal protection for civil rights workers.

Lucie Baines Johnson, daughter of President Lyndon Baines Johson, leaves the Nursing School as she wishes to marry and married woman are not permitted to continue as students in the School

Mask and Bauble provide lighting for the White House’s Festival of the Arts held on June 14.  Lady Bird Johnson sends a signed photograph with an inscription of thanks

Georgetown becomes the first U.S. University to hold a summer program at the Moscow State University. This program is repeated in 1966

Architectural firm of John Carl Warnecke and Associates is commissioned to design the library in July 1965. Warnecke had previously designed the memorial to John F. Kennedy in Arlington National Cemetery

Harry P. Guenther is named the first Dean of the Business Administration School

Florence Dailey leaves $7 million in Eastman Kodak stocks to Georgetown. This bequest is the largest ever received by the University to this point. The motivation for her generosity – she had no personal connection to Georgetown – is unknown. The University uses the money for student scholarships

Thomas R. Fitzgerald, S.J. – known to students as “Fr. Fitz” or “the silver fox” – is appointed as Academic Vice President.  A popular administrator who takes a strong interest in the affairs of student government, he resides on the third floor of New South

Royden B. Davis, S.J. (C’1947, L’1949) is appointed Dean of the College of Arts and Sciences. Under his leadership the College becomes co-educational in 1969. He oversees the inauguration of the American Studies Program and the establishment of the Departments of Psychology, Sociology and Computer Science. He retires as Dean in 1989. The Performing Arts Center on campus is named for him

Psychology and sociology departments are established

Pay parking on campus is approved by the Board of Directors

Valerie A. Earle is elected as the first president of  the newly created Faculty Senate

Law School graduates are awarded J.D.s rather than LL.B.s for the first time

After the first Alumni-sponsored European tour, alumni clubs are established in Rome, Paris, and London

Lay members are appointed to the Board of Directors

Protestant and Jewish theologians are added to the Theology Department

Four days of riots in DC follow the assassination of Dr. Martin Luther King. After a memorial service in the Quadrangle at noon on April 5, a delegation of hundreds of Georgetown students led by the GUPCC co-chairs march to the White House to deliver a petition in support of a national day of mourning for Dr. King. Classes are cancelled beginning Monday April 8, allowing students to go home three days early for Easter if they wish; many stay help local residents

Bill Clinton graduates from the Foreign Service School. Among his fellow graduates is Gloria Macapagal-Arroyo (President of the Philippines from 2001 until 2010)

Community Scholars Program is founded as a direct response to the racial justice crises of 1968. It aims to promote social justice by enrolling a more racially and socioeconomically diverse student body

Georgetown Voice publishes its first issue on March 4. Its editors promise to present and analyze national and local issues of concern to the student, whose concern should spread beyond the campus. The paper takes its name from New York’s Village Voice

San Francisco Mayor Joseph L. Alioto is prevented from speaking in Gaston Hall on March 13 by members of Students for a Democratic Society (SDS), most of whom were not Georgetown students. Thousands of students sign a letter of apology to him

Black Awareness Week is celebrated on campus for the first time,  April 14-19

After women enroll in the College in the fall, Copley Hall is designated as a coeducational dorm, with women housed on its third floor and, later, on its fifth

Dr. Patricia Rueckel is appointed as Vice President for Student Development and becomes not  only the first woman vice president at Georgetown but the highest ranking woman administrator in any of the 28 Jesuit colleges and universities in the U.S. The following year she is elected president of the Conference of Jesuit Student Personnel Administrators

Mary Switzer, the first administrator of the Social and Rehabilitation Service in the Department of Health, Education and Welfare, is the first woman elected to a term on the University’s Board of Directors

Students participate in protests in the fall to oppose plans by the District of Columbia to build a bridge over the Potomac River near the Three Sisters islets. Construction for the bridge would have displaced thousands of families, predominantly African-Americans, from their homes in D.C. Plans for the bridge were eventually withdrawn from D.C.’s master transportation plan in 1977

Seven courses in Black Studies are created for the fall

Comedian and Civil Rights activist Dick Gregory speaks in Gaston Hall in October. He touches on issues relating to inequalities in society