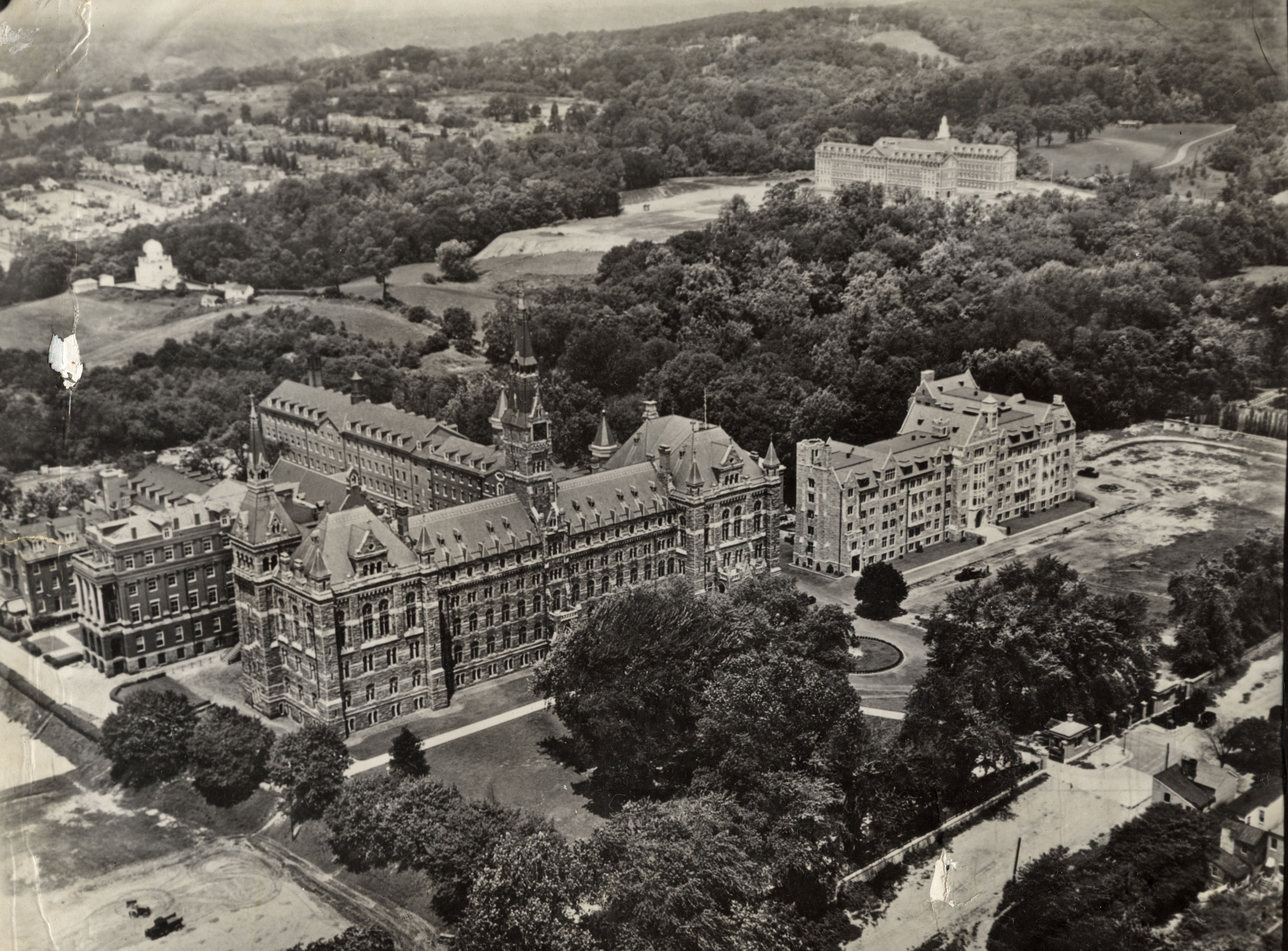 First issue of The Hoya appears on January 14

18 foreign service students spend June and July in Venezuela, studying trade and economics at the University of Caracas. They stay with local families to practice their Spanish. This may be the first study abroad program undertaken by an American university

Georgetown Publicity Bureau is set up. Staffed by students, its aim is to promote the University by supplying stories to newspapers across the country

20,000 seat football stadium is proposed for the far northwest of campus, at a cost of $35,000. Less than a decade later, this site becomes home to the Medical-Dental Building and the varsity athletic field

Marshal Ferdinand Foch, Commander in Chief of the Allied armies during World War I, is awarded an honorary degree on November 16. He is visiting D.C. as France’s representative at the Limitation of Armament Conference held on November 11

Five Georgetown students are among the ninety-eight people killed on January 28, when the roof of the Knickerbocker Theatre in Adams Morgan collapses under the weight of accumulated snow after a blizzard (which came to be known as the Knickerbocker blizzard) drops 28" of snow on D.C.

Pan American Students Association is inaugurated on January 28. Its aim is to encourage intellectual interaction among students from the Americas

Rifle team wins the National Intercollegiate Championships of Rifle Clubs affiliated with the NRA in March. The team accumulates a score of 3,934 out of a possible 4,000, the highest ever attained in the competition

Sophie A. Nordhoff-Jung, M.D., is hired as instructor of gynecology in the Medical School; she is the first woman to join the University faculty.  She is promoted to associate professor in 1935

Admission requirements for the Law School change; students now must have a least one year of college credits

Admission requirements for the Law School change again; students now must have a least two years of college credits

Admission requirements for the Dental School change; students must have at least one year of pre-dental college work. College introduces a pre-dental program to meet this need

Elmer Ripley is hired to coach the Hoya basketball team. He has an immediate impact and his first squad wins 12 of its 13 games. He leaves in 1929

W. Coleman Nevils, S.J. becomes president. During his tenure, despite the depressed national economy, the Medical-Dental Building and Copley and White-Gravenor Halls are constructed

Dental School begins a Dental Hygiene program, restricted solely to women students. An intense 35 week program consisting of lectures, recitations, lab work, and practice in assisting in clinics, it is terminated in 1937 due to declining enrollments. Women cannot enroll as DDS students until 1954

Founders Day is revived by President Coleman Nevils. He changes the date from January 23 (John Carroll bought the first part of campus on January 23, 1789) to March 25 (settlers from England - including three Jesuits - made their initial landfall at St. Clement’s Island, Maryland on March 25, 1634)

Medical-Dental Building opens on Reservoir Road and the Medical and Dental Schools move onto campus for the first time. Originally, this building is planned for 37th Street just outside the main gates. However, President Coleman Nevils moves it to Reservoir Road

Copley Hall opens on February 16. It is completed $125,000 under budget. The depressed state of the national economy lowers building costs. Additionally, the University saves money on materials by buying 7000 tons of granite and sandstone from the old M Street Bridge over Rock Creek which was demolished in 1929, and incorporating them into the building

Leo Sexton, C’1930, wins a gold medal in the shot put at the Los Angeles Olympics

Ahead of the four-day national banking holiday in March that keeps all banks shut, the University, warned of the move by a local bank, withdraws  $200,000 in cash to ensure it can continue to operate

White-Gravenor opens in November. Originally intended to house chemistry labs and lecture halls, by the time construction starts it has changed to a combination of labs, classrooms, and administrative space

Lyndon Baines Johnson of Johnson City, Texas enrolls in the Law School for the 1934-1935 academic year. He then moves back to Texas

Mask and Bauble performance of The Tavern on December 5 is the first performance by a Georgetown drama group to include women in the cast. Students from Trinity College play the female parts. First Lady Eleanor Roosevelt attends the performance

Foreign Service School establishes an Undergraduate Division of Business and Public Administration to prepare students for careers in accounting, entrepreneurship and government service

Eugenio Cardinal Pacelli, the Papal Secretary of State, visits campus on October 22 and is awarded an honorary degree by Georgetown. The Cardinal is elected to the Papacy in 1939 and assumes the name Pius XII

Elmer Rilpey returns as basketball coach. In 1939, Georgetown wins a share of the Eastern Intercollegiate Basketball Conference (EIBC) and in 1943 advances to the NCAA finals

James S. Ruby becomes secretary of the Alumni Association. He is tasked with locating and organizing alumni across the country ahead of the University’s 150th anniversary. A monthly Alumni Bulletin begins

The Hoya publishes an editorial condemning the decision of DAR to refuse world-renowned singer Marian Anderson permission to perform in Constitution Hall because of her race , March 1. The editorial states: [the decision] has gone against and repudiated one of the proud boasts of the American people, that all men are created free and equal

Georgetown celebrates its sesquicentennial. More than 1500 alumni return to campus for festivities. As part of the celebration, Georgetown Day is held on September 11 at the New York World’s Fair