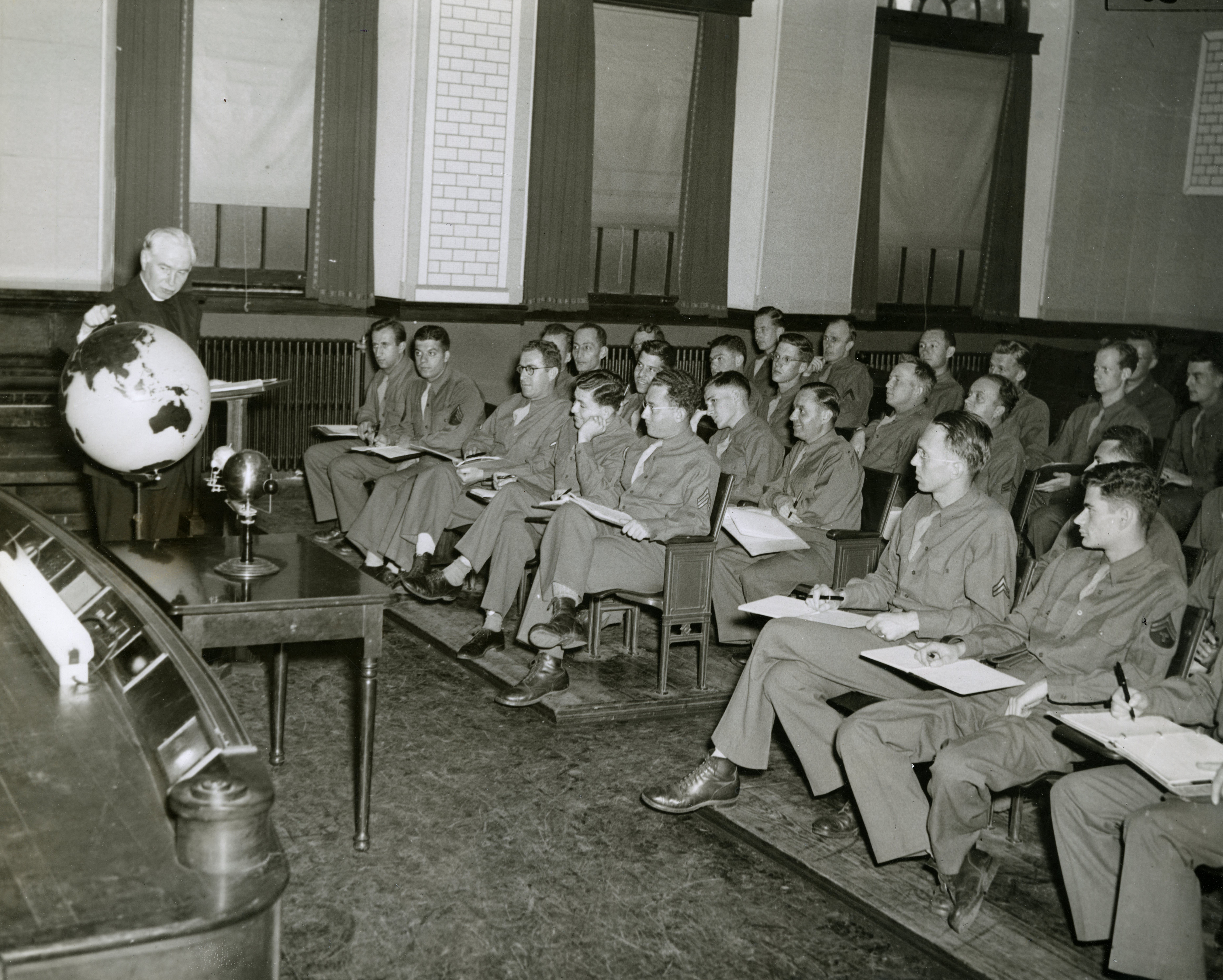 Glenn Miller plays at the Senior Ball, May 17

Georgetown plays in the Orange Bowl, January 1. Depleted by injuries, the Hoya lose to the Mississippi State Maroons, 14 to 7

Lawrence C. Gorman, S.J., is  appointed President. He serves until 1949

Accelerated course of study is introduced in July, due to World War II

War Department designates Georgetown as one of a select number of colleges around the country to house Army Specialized Training Program (ASTP) in April. The program’s object is to train soldiers for specific Army needs (in fields such as medicine, engineering, science, and languages)

Robert A. Duffey, C’1944, is killed in combat in Germany. The University's scholar-athlete award, presented annually to the senior who best embodies the Jesuit educational philosophy of combining athletic achievement with academic excellence, is named in his honor

Veterans Administration establishes an office in Old North to assist former service men enrolling under the G.I Bill in May. By spring 1946, veterans make up more than 4/5ths of students in the Foreign Service School

Doris Day, then the vocalist with the Les Brown Orchestra, sings at a formal dance, December 8

Anne S. Lawrence and Mary Alice Sheridan are the first women to graduate with a BSFS degree from the Foreign Service School, due in part to credits transferred from other schools

Fire breaks out in Isaac Hawkins Hall, destroying its top floor. The building was subsequently repaired and the fourth floor and roof were rebuilt to a different configuration.

Georgetown University Hospital moves onto campus off Reservoir Road, from its original buildings on Prospect, N, and 35th streets, on July 31

Students drive to Philadelphia and “catnap” Villanova mascot (a bobcat named Count Villain III) a week before the GU-Villanova football games in November. The cat is kept in the basement of Healy Hall and then returned.

Concepcion A. Aguila is the first woman to receive a Ph.D. from Georgetown as a regular degree seeking student

Campaign to raise $800,000 from alumni for a new gymnasium to be named for Fr. Vincent McDonough, longtime moderator of athletics begins

Sarah Stewart is the first woman to graduate from the Medical School. Dr. Stewart becomes an instructor in the Medical School in 1944.  At that time, the school is not accepting women as regular students.  When that policy changes in 1947, she enrolls

Institute of Languages and Linguistics opens as an off-shoot of the School of Foreign Service. It is located at 1717 Massachusetts Avenue, NW, and is the first school in the U.S. to offer courses leading to the degree of Bachelor of Science in Languages. Women are able to enroll in Institute

Jan Karski begins teaching in the Foreign Service school. He remains at Georgetown for four decades. He played an active role in the anti-Nazi underground after his home country of Poland was invaded in 1939. In 1942-1943, he provided some of the first accounts of the Holocaust to the West when he reported to the Polish government-in-exile and the British and American governments about what he had seen in Poland

Groundbreaking ceremony for McDonough Memorial Gym is held on  May 20

Class of 1950 presents the University with a statue of Our Lady of Fatima as their class gift. Made of Carrara marble in Italy, the original statue is broken as it is loaded on a ship for its journey to the U.S. A second statue is made which arrives just in time to be dedicated at commencement. It is placed on Copley lawn

Patricia Anna Collier is the first woman to enroll in the Law School in the summer.  Six additional women join her in the fall

University purchases of bricks damaged in the War of 1812 from the White House which is under renovation. They are incorporated into a fireplace in McDonough Gymnasium

McDonough Memorial Gym opens in December, allowing home games to be played on campus for the first time since the 1930-1931 season. The first game is played on December 7 against Fordham and ends with a score of 57-50 in Fordham’s favor

University Development Office is set up with Fr. Charles Foley as the first director

Edward B. Bunn, S.J. is appointed as University President

One of the only two inaugural balls held in honor of U.S. President Dwight D. Eisenhower takes place in McDonough Gymnasium, January 20

Mary Margaret Lewis, a New York artist, paints a mural of John Carroll, the founder of Georgetown University, on the grand staircase in Healy Hall

Konrad Adenauer, Chancellor of the Federal Republic of Germany, is awarded an honorary Doctor of Laws degree in a Gaston Hall ceremony on April 7

Ryan Gym is converted into offices for university records, development, accounting, treasurer, public relations and placement at a cost of $213,000

Samuel A. Halsey becomes the first African American to earn an undergraduate degree when he graduates from the Foreign Service School

Sadako Ogata earns a master’s degree in international relations; in 1990 she becomes the United Nations High Commissioner for Refugees

Graves in the College Graveyard or Old Burial Ground, which is located on the incline where Reiss Science now stands, are moved to Mount Olivet Cemetery, with one exception. Susan Decatur, who died in 1860, is moved to Holy Rood Cemetery on Wisconsin Avenue

Nursing School celebrates its 50th anniversary in November. The celebration includes a groundbreaking ceremony for a new Nursing School building

Women are able to take day classes in Foreign Service School. Prior to this date, they are limited to evening classes

Inaugural class is  selected for the Georgetown Athletic Hall of Fame

James B. Horigan, S.J. is appointed as Director of University Libraries

Kathleen D. “Skippy” White, a student in the Nursing School and member of the GU sailing team, is the first Georgetown  woman to win a varsity letter. As half of a two-member team sailing in Class A dinghy competition, she successfully competes with – and against – men

Valerie A. Earle is the first woman appointed to the faculty of the Business Division

Position of Academic Vice-President is created. The AVP has authority over all main campus schools. Brian McGrath, S.J. is appointed to the role

Vera Rubin is hired as a research associate. She serves as assistant professor of astronomy between 1962 and 1965. A few years later she makes groundbreaking observations that provide evidence for the existence of a vast amount of dark matter in galaxies, changing the way scientists think of the universe.  In January 2020, the National Science Foundation names a telescope designed to conduct “a vast astronomical survey” for her

Glee Club sings on the Ed Sullivan Show on CBS, on Easter Sunday, 1956

Helen E. Steinbinder is the first woman appointed to the Law School faculty when she is hired to teach Real Property

James B. Horigan, S.J. is appointed Dean of the Graduate School

Gorman Building is dedicated on March 19 by the President of Ireland, Sean O’Kelly