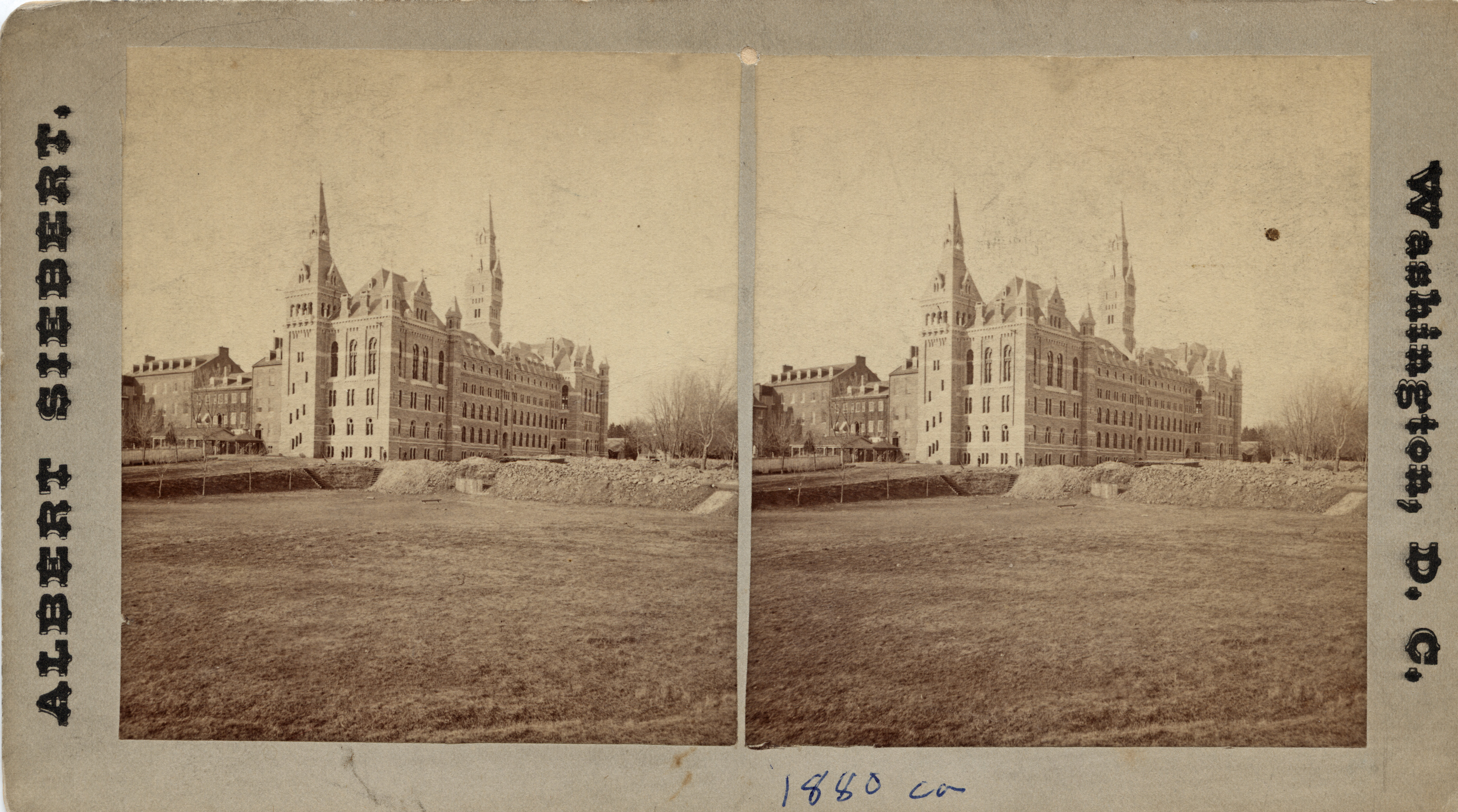 Black crape is hung on the porches of North and South Buildings and over the main gate on April 15, after news of the assassination of President Lincoln reaches campus. Three Georgetown alumni, David Herold, Samuel Arnold and Samuel Mudd are convicted in the assassination conspiracy. Herold is hanged

Philosophy professor, John Guida, S.J. is mistaken for  John Wilkes Booth and  arrested in the aftermath of President Lincoln’s assassination. He is held in a military camp in Virginia until the real John Wilkes Booth is located

338 students enroll at the beginning of the fall semester, including 75 in the Medical Department

Stone wall along the eastern edge of campus is completed. Its construction is prompted by rising rates of vagrancy and theft caused by the failing post-Civil War economy

Georgetown’s second professional school, the Law Department, opens. It is the first law school created by a Jesuit institution of higher learning in the United States. Classes begin in October with 25 students who come from twelve states and from Cuba

A professor of pharmacy is appointed with the aim of developing a Pharmacy School. However, there is very little demand for his classes and the program disappears by 1873

Chemistry classes are introduced for the sophomore and junior classes

The "acting" portion of Patrick F. Healy, S.J.’s presidential title is dropped on July 31. During his tenure, he expands the curriculum and brings the professional departments (Law and Medicine), housed off-campus, more firmly under the control of the University. He also transforms campus by constructing a large new building, later named for him, which more than doubles the total square footage of Georgetown's buildings

Department of English Literature and Declamation is established

Athletic Association is formed. Under its auspices, Georgetown holds its first annual Field Day. Events include hurdles, vaulting and a tug-of-war between classes

Construction begins on Healy Hall, originally known as the “New Building” and later designated as the “Main Building”

Boat Club builds its own boat house.  This is destroyed in a flood four years later

Roster of Georgetown students who have attended since 1812 is compiled, organized geographically by place their place of origin. Although far from complete, it lists almost 250 international students, including 71 from the West Indies (mainly from Cuba), 44 from Mexico, 32 from Canada, and 27 from England and Ireland

Annie Rice and Jeannette Sumner enroll in the Medical School. They stay for one year

Society of Alumni hold their first Reunion to coincide with commencement

The University has, by this point, spent over $437,000 on the construction of Healy Hall.  Father Healy was told by the Superior General of the Jesuit Order in 1877 that costs were not to exceed $100,000

Georgetown plays and wins its first intercollegiate football game against the University of Virginia.  The score is 34-0

Twelve-inch equatorial telescope is purchased for the Observatory

Riggs Memorial Library, located in the south tower of Healy Hall, opens. It serves as the main University Library until 1970. The Library is financed by E. Francis Riggs of the Washington banking firm, as a memorial to his late father and to his brother who had attended Georgetown

Law School moves to its fifth home at 6th and E Streets, N.W., where it remains until 1971 when the Law Center opens on New Jersey Avenue.

Formal graduate studies, with a year-long concentration of study in three of six fields (philosophy, history, literature, mathematics, physics and chemistry) are introduced

Senior class petition to be able to wear cap and gown at commencement. Permission is granted three years later

Boxing club is formed in October

Dahlgren Chapel is consecrated on June 9. It is the first building on campus financed entirely by outside philanthropy and the first named for a non-Jesuit. It is paid for by John Dahlgren, who had graduated in 1889, and his wife Elizabeth Drexel Dahlgren. Elizabeth takes a close interest in plans for the Chapel’s design and even specifies what kind of ivy should be planted to grow on its exterior

Medical School increases its course of studies from three to four years. This move comes two years ahead of an official mandate from the Association of Medical Colleges for four year courses

Conde M. Nast graduates from the College of Arts and Science

Admission age is raised to 13

Round version of the Georgetown seal, in use since around 1889, is officially adopted by the Board of Directors on April 16.  Its design elements are more tightly grouped, with much of the previous detail omitted. Somewhat at odds with this simplification is the rendering of the school’s name in Latin rather than English

Captain of the Georgetown football team, George Bahen, is paralyzed during the Thanksgiving game against the Columbia Athletic Club (C.A.C.). The playing of football is suspended

New cinder track is installed for athletes to race on

George Bahen dies from his injuries on March 26. He is buried in his home town of Richmond, Virginia

Graduate studies are extended to include a doctorate program

Students are able to leave the dining hall when they are finished eating, instead of having to wait to process out with their classmates as has traditionally been the practice

First section of the Georgetown University Hospital on N Street is completed in May and opens to the public in August. It includes beds for 29 patients, a lecture room, and an emergency operating room

Law  School expands the course work for the Bachelor of Laws degree from two to three years, a change made well ahead of most law schools in the country