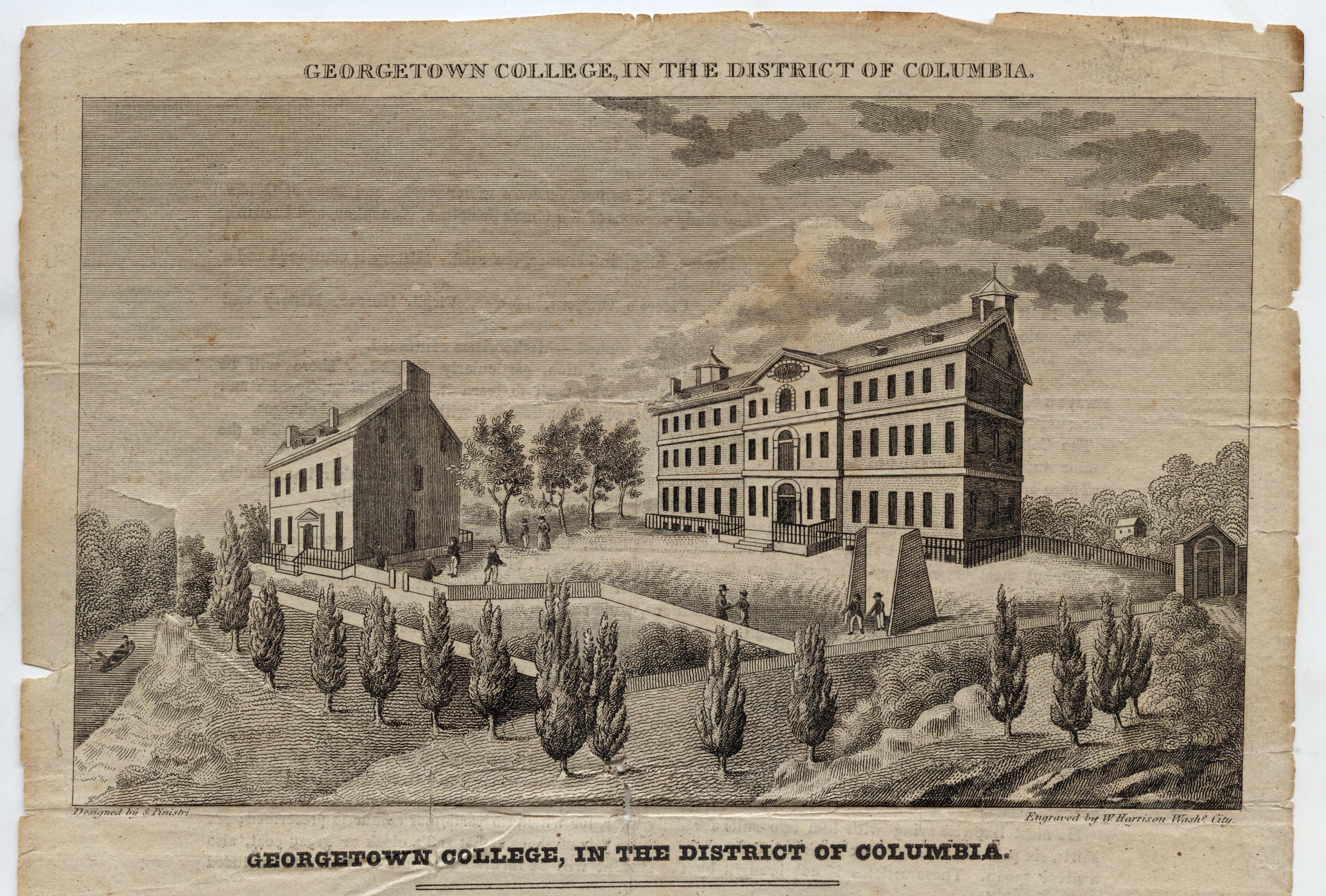 John Carroll is born on February 8

Jesuit Order is suppressed by the Vatican

John Carroll explains his plans and hopes for his academy in a letter written to Father Charles Plowden on March 1: We shall begin the building of our Academy this summer. In the beginning, we shall confine our plan to a house of 63 or 64 feet by 50, on one of the most lovely situations that imagination can frame. It will be three stories high, exclusive of the offices under the whole. Do not forget to give and procure assistance. On this academy is built all my hope of permanency, and success to our H. Religion in the United States

John Carroll is appointed Bishop of Baltimore on November 6

Jean-Edouard de Mondésir, S.S., a member of the Society of Saint-Sulpice, a French religious order, arrives in October as Georgetown’s first member of faculty. He is the first person to move into the South Building, then still under construction. For a salary of 75 pounds sterling, he teaches French, Greek, and philosophy until 1796

William Digges hires an enslaved woman named Sukey out to Georgetown College from 1792 to 1797. The College pays him £10 per year. In addition to Sukey, a number of enslaved persons work at Georgetown in the first decades of the College's operation, some owned by the Jesuit Order, others hired on a temporary basis from local slave holders

Land on which Old North sits is bought

First international students, brothers Nicholas and Jean Jaques Fevrier, arrive from the French West Indies on April 17. They pay part of their fees by barter, using muscovado sugar and coffee

Robert Molyneux, a former Jesuit and emigré from England,is appointed as the second president. He serves until  1796

William Louis DuBourg, S.S., a native of the French colony of Saint Domingue [which we know today as Haiti] becomes the third president of Georgetown in October. Aged 30 when he takes office, he is still the youngest person to have assumed that role

Board of Directors is  established in September

Fire starts on November 15 after a log rolls out of a fireplace on the second floor of the South Building. Citizens from Georgetown help to put it out. Damage is assessed at £21

Georgetown issues its first printed prospectus on January 1. A three page document, printed in English, Spanish and French, it is designed to  inform the parents of prospective students about the curriculum, fees, what students need to bring with them, etc.

President DuBourg, a professor and two students dine with George Washington at Mount Vernon on July 10

A formal religious community according to the Visitandine rule and a school for girls are founded near what are now 35th and P Streets, N.W. Given the school’s geographical proximity to the College, associations form between the two institutions. By the 1850s, older students at the College are hosting dances to which young ladies from their own families and from Visitation are invited. Ties grow stronger after a junior college is established at Visitation in 1919

James Ord, reputed by some to be the son of the Prince of Wales (later King George IV) and Maria Fitzherbert, enrolls in the College

Charles Boarman sells a thirty-year-old man named Wat to Leonard Neale, president of Georgetown College, for $400 “for the use of said College.” Wat is later sold to St. Inigoes, one of the Jesuit plantations in southern Maryland

Washington, D.C., is incorporated by Congress meaning that Georgetown College is now located in the District of Columbia, rather than Maryland

Jesuit Order is partially restored. Jesuits begin to fill most of the teaching and administrative positions at Georgetown

St. Mary’s, a Catholic seminary in Baltimore, charters as a civil college and immediately begins competing (mostly successfully) with Georgetown College for students

First burial takes place in the Jesuit Community Cemetery on August 16. The Cemetery at this time is located close to what is now the south end of Healy Hall

Francis Neale, S.J. serves as acting president of Georgetown from December 1808 to March 1809

Another Jesuit School, the New York Literary Institution, is founded and like St. Mary’s in Baltimore, competes with Georgetown for students. leading to a precipitous drop in Georgetown enrollment and accompanying financial problems

Interior of Old North is completed. The exterior and third floor were completed by 1795 but no money was available to complete the other floors until an anonymous gift of $400 is received in 1809

William Matthews, the nephew of Francis and Leonard Neale, serves as president of Georgetown for seven months. He is the first alumnus to serve in that role

Francis Neale, S.J. serves as president of Georgetown from 1810 to 1811. At the end of his term there are only 16 students enrolled

Giovanni or John Grassi, S.J. becomes President on August 11. He guides Georgetown College back from the brink of closure due to low enrollment and insufficient revenues.  By the time he returns to Rome in 1817, Georgetown is a re-invigorated school with 107 students, a federal charter which enables it to award degrees, and a growing library of more than 5,000 volumes

Brick handball court is erected on a site near the present location of the main entrance to Healy Hall. This represents the first capital expenditure for Georgetown athletics

Archbishop John Carroll comments about campus food to University President John Grassi, S.J., in a letter dated October 30. He writes: Never relax in your attention to the neatness and cleanliness of the College, & the personal neatness of your scholars; & to their diet.  I know it is good in substance, but I fear, your cook is deficient

North Building (Old North) is the largest undamaged building in the area after the British burn Washington buildings in late August - faculty and students survey the burning buildings from the top floor of the North Building. In October, it is offered to the Federal Government as an interim capital but the offer is not acted on

Bill granting a charter to Georgetown is signed by President James Madison on March 1.  Georgetown now has the authority to grant degrees

Benedict J. Fenwick, S.J. becomes president in June.  He is the second alumnus to hold this position

Burials begin in the College Graveyard or Old Burial Ground which is  located on the incline where Reiss Science now stands. They continue into the 1890s. The death register for Holy Trinity Church records the names of those buried there, among them a number of slaves

Enoch Fenwick, S.J. the brother of Leonard, assumes the presidency

An indoor washroom is built. Prior to its construction, students washed at the pump in the Quadrangle

Benedict Fewick again becomes president. He is the 12th president since 1791

Georgetown stops charging tuition. Traditionally, Jesuits did not charge tuition in their schools. Georgetown is the exception to this practice until 1827 when the Order’s Superior General in Rome explicitly rules that it should cease collecting tuition. Students are still charged for board and lodging

Thomas Mulledy, S.J. becomes president on September 14. He serves until 1838