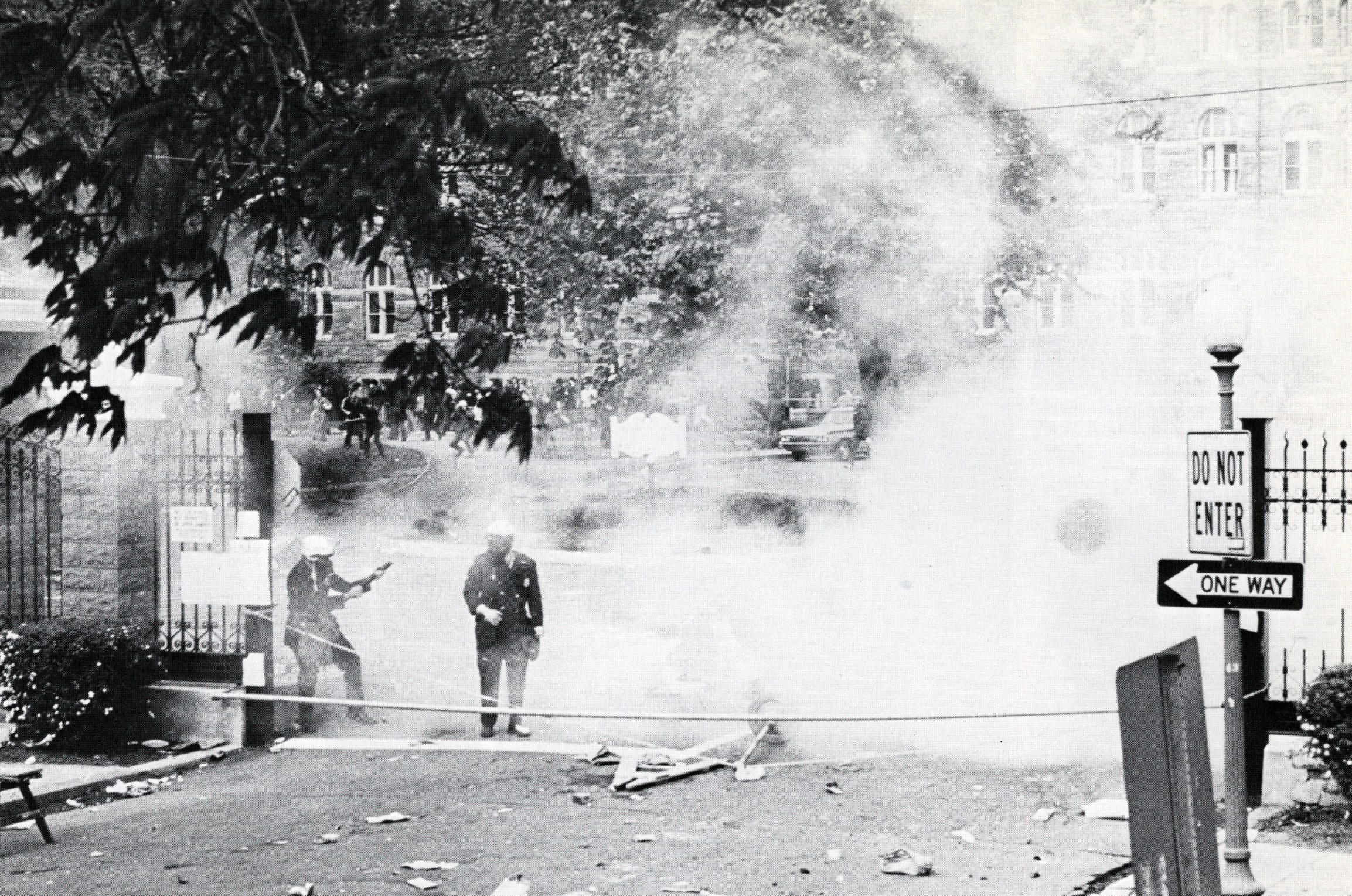 Hoyas Unlimited, the athletic booster club, is established in the spring

Roy Cogdell is appointed as Director of Community Programs, a new position within the University. He also serves as moderator for the Black Student Alliance. One of the few African Americans to hold high administrative office at Georgetown in the 1970s, Dr. Cogdell resigns in 1973 to become Dean of the College of Human Learning and Development at Governors State University, Park Forrest South, Illinois

Dean Price, AIA, is hired as University Architect, giving Georgetown for the first time unified and professional oversight of its campus planning process

Student Senate votes for a strike of classes from May 6-8 in support of  demands for the U.S. Government to cease escalation of the Vietnam War. After faculty support of the student strike, the University suspends classes on May 7 for the rest of the semester. Students are able to meet with faculty and take final exams on a voluntary basis. Alternatively, they are able to settle for existing grades or make arrangements to submit papers in place of final exams

Wisdom and Discovery in a Dynamic World Progress Fund campaign ends, having raised $4,000,000 for scholarships, fellowships and student loans and for the construction of the Law Center, Lauinger Library, Dahlgren Memorial Medical Library, Dental Clinic, and Basic Science Building

All rock concerts on campus are suspended in November, following incidents at the Grateful Dead and Traffic concerts held in McDonough Gym on October 23 and November 15

Protestors in DC to demonstrate against the Vietnam War arrive on campus on May 2 after their camping permits for West Potomac Park are cancelled. They set up tents on the athletic field and after it begins to rain, are invited into the dorms by GU students. The University opts to let them stay as they are peaceful. They leave around 6 a.m. the next morning (May 3)

Around 2500 anti-war demonstrators are driven onto campus by police using tear gas on May 3. A decision is made at 9:15 a.m. to cancel exams – 15 minutes before they are due to start. An area for washing off pepper and tear gas is set up in the Bles Building and student marshals work, at great personal risk, to try and keep police and demonstrators apart

Kennedy Foundation pledges over $1 million to found a center for the study of human reproduction, leading to the establishment of the Kennedy Institute

Bernadette Savard, C’1973, is selected as the first woman editor-in-chief of The Hoya

Elizabeth Glenn Sarpy, director of the District of Columbia Health and Welfare Council, and Rita Lenihan, G’1945 and one of the first woman admitted to the Graduate School, are the first women appointed to the Board of Regents

Edmund G. Ryan, S.J. is appointed to the newly created position of Executive Vice President for Educational Affairs. He is known as an administrator who frequently works 14-hour days and who is very accessible to students

Volleyball team is set up

Students of Georgetown, Inc. (The Corp) is chartered

Film crew for The Exorcist spend seven days on campus in October, filming at locations which include the Quadrangle, in front of Healy Hall, and the steps leading from Lauinger Library to 37th Street. Around 300 Georgetown students appear as extras in the production, mainly in crowd scenes

University announces in January that President Richard Nixon will be the commencement speaker. In April, he declines the invitation and the University invites the Most Rev. William Baum, Archbishop-elect of Washington, to be the principal speaker

Students place around 6000 lemons against the door to the President’s Office on February 2, while the Board of Directors is meeting inside. This “lemonstration” is to protest proposed increases in tuition and board and rising enrollments. Undeterred, the Board approves the increases

Sister Laetitia Blain, R.J.M. is the first woman to serve as a Chaplain on campus

Vital Vittles opens. The first storefront of The Students of Georgetown, Inc. (The Corp), Vittles begins as a food co-op in the lobby of New South before moving to Healy basement

James E. Alatis becomes Dean of the School of the Languages and Linguistics, a position he holds until 1994

University buys Alban Towers, an apartment-hotel located at 3700 Massachusetts Avenue, N.W., to ease its student housing crisis. Around 320 students move in at the beginning of the fall semester, joining around 100 sitting tenants who choose not to leave. Georgetown sells the building in 1996

Jane Fonda and a number of other anti-Vietnam War activists, including Tom Hayden, speak in Gaston Hall on October 4

Edmund G. Ryan, S.J., the Executive Vice President for Educational Affairs, is dismissed by President Henle in a letter dated April 11, which cites irreconcilable differences. The dismissal sparks widespread protests on campus. The Board of Directors subsequently upholds the dismissal but prohibits the University President from any future firings of top administrators without their prior consent

Duke Ellington plays his last concert in his hometown of D.C. at Gaston Hall on February 10, three months before his death on May 24, 1974

Georgetown College Class of 1978 arrives on campus, the first to contain more women than men

New shuttle bus service run by the Georgetown University Transportation Society starts on September 4. All drivers are Georgetown students who have completed rigorous training.  There are three initial routes – to the Law Center, Alban Towers, and Arlington; the fare is 25 cents

Banner containing a racial slur directed against basketball coach John Thompson, II is briefly displayed in McDonough Gym during a home game. His players issue a strongly worded statement in support of him. The team goes on to earn a berth in the NCAA tournament for the first time since 1943

Cabaret is held for the first time

Georgetown awards an honorary degree to Empress Farah Pahlavi of Iran on May 16. She is accompanying her husband, the Shah, on a state visit to the U.S. The ceremony draws  around 400 protestors

Women’s teams in lacrosse, swimming and crew are set up

Dahlgren Chapel renovations begin in the summer. The $325,000 project is undertaken to make the Chapel more conducive to contemporary liturgy and includes the replacement of pews with removable seating, the raising of the floor to make the entire Chapel one level, and the removal of overhead hanging lights. Dahlgren reopens on January 31, 1976

Center for Contemporary Arab Studies opens in the fall

Carroll Quigley, Professor of History at Georgetown for 35 years, retires in 1976.  His Development of Civilization course is cited by School of Foreign Service alumni from 1941 to 1969 as the most influential of their undergraduate careers

Timothy S. Healy, S.J. becomes President. He has previously served as Vice Chancellor for Academic Affairs at the City University of New York. During his tenure, the endowment increases nearly six-fold and the University’s physical plant grows by 67% as he oversees the construction of a dozen buildings, including the Yates Memorial Field House and the Leavey Center

Dr. Henry A. Kissinger, former Secretary of State, accepts a joint appointment as Visiting Professor of Diplomacy at the Foreign Service School and as Counselor to Georgetown’s Center for Strategic and International Studies (CSIS) in March. He is then appointed University Professor of Diplomacy in the summer. The appointment is not without controversy and Students Opposed to the Appointment of Kissinger [SOAK] campaign for a review of it on procedural and moral grounds

Writing Center is set up

Honorary doctorate is awarded to the Most Reverend Oscar A. Romero, Archbishop of San Salvador and human rights and social justice advocate, in the Cathedral of San Salvador on February 14. This marks the first time that Georgetown has held an off-campus honorary degree ceremony. On March 24, 1980, the Archbishop is assassinated while celebrating Mass

WGTB-FM stops broadcasting on January 31, when its 1978-1979 budget runs out. President Timothy Healy, S.J. sells the station license to the University of the District of Columbia for $1. UDC sells it to C-SPAN in 1997

Elvis Costello plays a concert in McDonough Gym on April 6

Four members of the Georgetown Varsity Crew Team, Jim Costello, Dave McAneny, Peter Radell and Mark Wessel, compete at the Henley Royal Regatta on the Thames River in England and place fourth. This is the first time a Hoya crew has competed internationally

Dalai Lama speaks in the Hall of Nations on September 10

Yates Field House is dedicated on October 28. It was built at a cost of $7.5 million