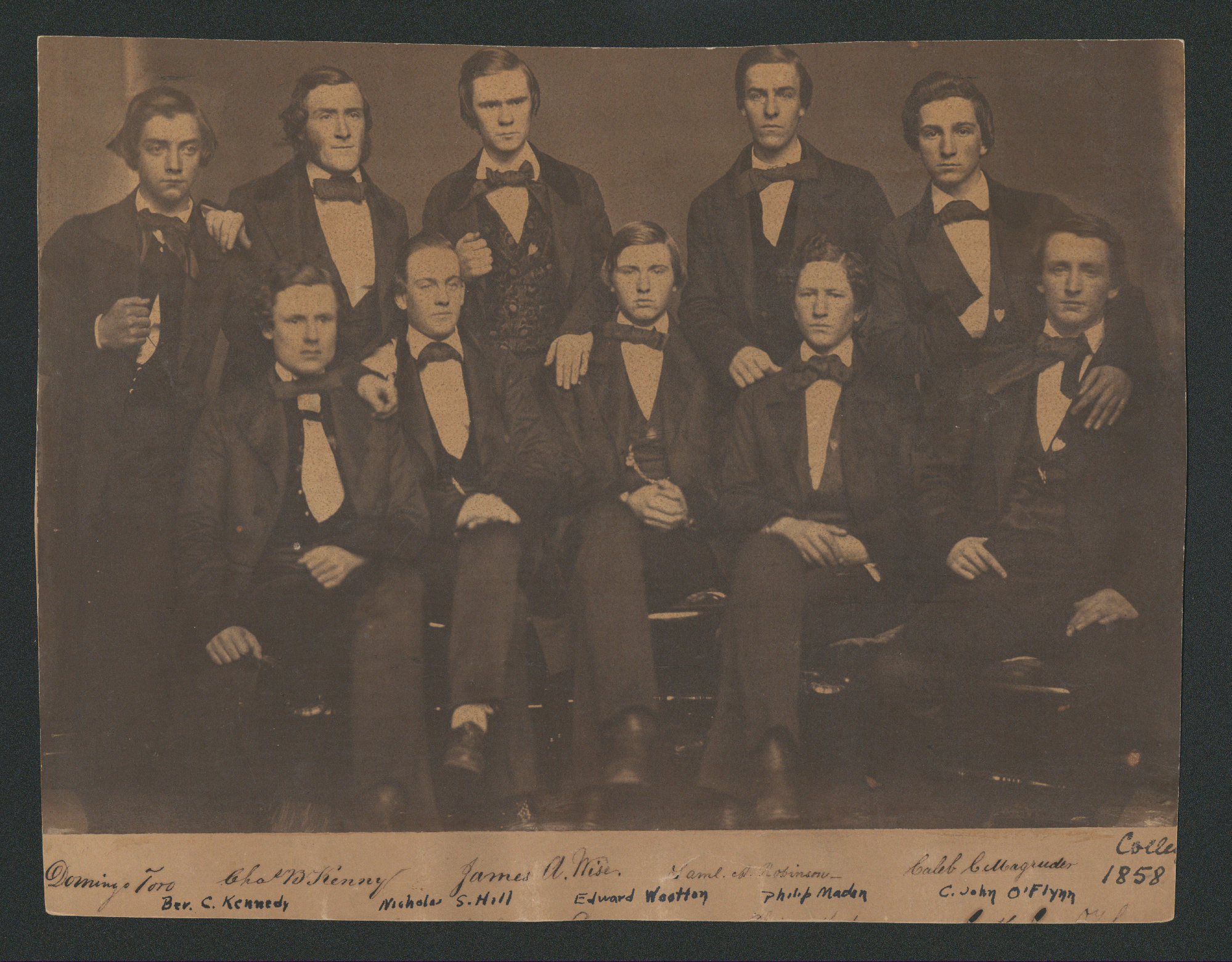 Thirty-three students meet to organize a debate society, subsequently named the Philodemic Society of Georgetown College. The topic of their first debate is: Who was the greater man, Napoleon Bonaparte or George Washington? Unsurprisingly, Washington is judged greater

Gervase Hall is constructed to serve as the College infirmary.  It replaces a wooden structure on the same site which also served as an infirmary

The “New Building” (Isaac Hawkins Hall) is completed. A multi-functional building, its first floor houses the student dining hall, its second floor includes a student chapel, and its third floor is used as an auditorium where commencements and other large gatherings are held until Healy Hall is completed

After a formal request for dispensation from the ban on charging tuition is granted by Rome, the College is able to collect tuition payments once more

Over 2000 Washington,  D.C. residents contract cholera. As a result, students are hesitant to come to campus in the fall and the semester begins with only 50 students; by November there are 170

Maryland Jesuits sell 272 enslaved persons who worked on their plantations, and at times on Georgetown’s campus, to two Louisiana plantation owners. Planning for the sale begins under Fr. McSherry and is completed by Fr. Mulledy. Proceeds from the sale’s down payment are applied to offset the crushing debts which Georgetown owes from constructing the infirmary (Gervase) and the New Building (Isaac Hawkins Hall)

Jose Lopez, S.J. is appointed acting President on January 1, after the death of William McSherry, S.J. Fr. Lopez came to the Georgetown area with the widow and children of the Mexican Emperor, Agustín de Iturbide, as their personal chaplain. He entered the Society of Jesus in 1833 and is believed to be the first Mexican to hold the office of president at a U.S. college

James J. Ryder, S.J., an alumnus, becomes president on May 1

Author Charles Dickens, accompanied by D.C. Mayor William Winston Seaton, visits campus on March 15. He summarizes his impressions in American Notes for General Circulation, which is published when he returns to England

Construction of the Observatory begins

Georgetown receives a corporate charter by act of Congress. As a consequence, the College adopts an official seal for the first time

Thomas Mulledy, S.J. is again appointed president on September 6. He serves until 1848

Students collect $336 for famine relief in Ireland in February

Father Angelo Secchi, who is known as the father of astrophysics, arrives at Georgetown from Italy with fellow astronomer Benedict Sestini, S.J. Their arrival gives impetus to astronomical research at Georgetown which began a few years earlier with construction of the Observatory

Angelo Secchi, S.J. conducts a live demonstration at commencement. He constructs an electrical battery which holds up sixteen hundred pounds

After a riot and the expulsion of three of their classmates, sixty students leave campus on January 15. They go to the Globe Hotel in Washington and issue an ultimatum that they will not return until they have amnesty and the expelled students are taken back. Georgetown College administrators respond by giving notice to the hotel that the students' bills will not be paid by the College. The students are persuaded to capitulate, demands mainly unmet, and return to campus on January 21

Georgetown’s first professional school opens as the Medical Department of Georgetown College in 1851. The Department is set up to be self-financing, with each faculty member sharing equally in the proceeds from student tuition, as well as bearing costs of operation. Its first building is at the corner of F and 12th Streets, N.W.

Georgetown College prints its first course catalog which covers the 1851-1852 academic year. In addition to providing a brief history of the institution, indicating fees, listing faculty and students, and reprinting the commencement program, the catalogs also lay out the curriculum

College Cadets form. Over the next eight years, 175 students serve in its two companies

Bernard Maguire, S.J. becomes President of Georgetown and serves until 1858

A dramatic troupe is officially established on campus. No tickets are printed for early productions; plays are seen by invitation only. The first show put on is Sheridan’s Pizarro, performed on February 7

Jesuit Community Cemetery moves from its original location close to what is now the south end of Healy Hall to its present location. The move is necessary because administrators feel it is too close to the new Maguire Hall

David Herold enrolls on October 4, aged thirteen. He leaves in 1858. In 1865, he is one of four conspirators hanged for involvement in the assassination of President Abraham Lincoln

John Early, S.J, becomes president. He serves until 1865, resolutely guiding Georgetown through the challenging years of the Civil War

Philodemic Society debates the question: Should the South Secede on December 18. The situation becomes so heated that a fight breaks out and meetings of the Society are suspended for the rest of the academic year to prevent any recurrence

Classes are cancelled on January 4, as the College participates in a national day of fasting and humiliation proclaimed by outgoing U.S. President James Buchanan in an attempt to avert the imminent evils from the Republic

Students begin to leave campus in January in anticipation of war

Students burn an effigy of President-elect Abraham Lincoln in February

Medical Department, fearing that Lincoln’s inaugural on March 4 might spark riots, requests permission to copy the record of decrees awarded to their students since their founding in 1851 on February 18. Their fear is that this information could be lost if their building, then at F and 12th Streets, N.W., is damaged

Members of the senior class present a petition to the College President, asking for permission to leave campus and return home on April 10. They are allowed to graduate without further studies if they wish

Campus is occupied by federal troops in May and June; President Lincoln reviews them on May 8, accompanied by Secretary of State William Seward and Secretary of War Simon Cameron

Commencement is held on July 2 . The entire ceremony, which takes place without an audience, lasts less than twenty minutes

Students on campus are able to hear cannons being fired during the First Battle of Bull Run, July 21
1862

Buildings on the south side of the Quadrangle, as well as the College’s villa in Tenleytown, are requisitioned by the Government to provide hospital  accommodation on August 31. Campus does not return to the College’s control until February 1863

Given its financial constraints, the College is able to fabricate the silver medals traditionally awarded to students for academic achievement at commencement only by melting down the silver spoons of students who had left

Aaron Edmundston, likely the last slave to work on campus, leaves in March. On April 16, the Compensated Emancipation Act comes into effect in D.C., nearly nine months before the signing of the Emancipation Proclamation, and ends slavery in Washington by paying slave owners for releasing their slaves

A combination of reduced income and inflation forces an increase in fees for tuition, board, lodging and laundry, the first in forty years, from $200 per year to $325

Medical Department establishes a chair of Chair of Military Surgery, Physiology and Hygiene at the suggestion of the Surgeon General U.S.A., February 2.  This chair is the first of its kind in the nation