This guide will introduce researchers to history of student activism on campus.

Note: collections that are digitized or have an online collection guide (finding aid) are linked.

University Archives Reference Files: These files serve as a starting point for research on a given topic. They contain photocopies of things like news clippings, photographs, correspondence, and other materials to give you a broad overview of what is available in the Archives for that particular topic. Beginning with the reference files can help researchers narrow down their topic of study.

Old Archives: Students: This collections contains correspondence, clippings, announcements, publications, and other material detailing all aspects of campus life, including student events, elections, organizations, protests, and activism. Reference is made to civil rights activity, as well as to protests against the Vietnam War. Material relating to the National Student Strike of 1970 and the May Day demonstrations of 1971 is included.

John E. Carmody (F 1973) Student Collection: This collection covers the period from 1969-1973 and contains material documenting everyday student life, including student activism efforts around the Vietnam War and the 1971 May Day Riots in Washington, DC. Includes photographs, pamphlets, and other ephemera.

University Archives Poster Collection: This collection contains posters or flyers for campus events, including those hosted by student organizations.

Photographs: College of Arts and Sciences Student Groups: This collection contains images of various student protests including a candlelight vigil before the Vietnam Moratorium in front of Healy Hall, protestors supporting U.S. President John F. Kennedy's Cuban blockade in front of the White House, a button from Emancipation March on Washington, August 28, 1963, WGTB protest in 1979 (negatives); and May Day riot, 1971 (contact sheets).

ROTC Scrapbooks: The scrapbook covering 1971-1978 includes news clippings of protests against the ROTC.

Old Archives: Military Files: Material from 1969 also documents the protests against the ROTC.

Georgetown Solidarity Committee: This collection covers 1996-2006 and contains a variety of material including a copy of the group's constitution and mission statement and with histories written by Ben Smith (B'99) and Andrew Milmore (C'01). Much of the material documents the activities of the group and specifically touches on the Collegiate Licensing Company (CLC) code of conduct protests and the Living Wage Coalition (LWC).

Lemonstration Collection: This collection contains material documenting a protest in 1973 by the student body against proposed increases to tuition and board costs as well as enrollment. Includes a flyer and lemon from the protest which is encased in plexiglass.

Students for a Democratic Society Collection: Includes issues of "View from the Outside" newsletter, Not With My Life You Don't: A Georgetown Student Handbook, and Abolish ROTC pamphlet.

Old Archives: Student Government: Includes material regarding the Student Strike in 1970 and the May Day protests in 1971.

Georgetown University Audio Archives: These digitized recordings touch on many subjects like the Civil Rights movement and the anti-war movement during the Vietnam War, including the large disruption during the visit by San Francisco Mayor Joseph Alioto and coverage of the subsequent disciplinary hearing for one of the students involved. 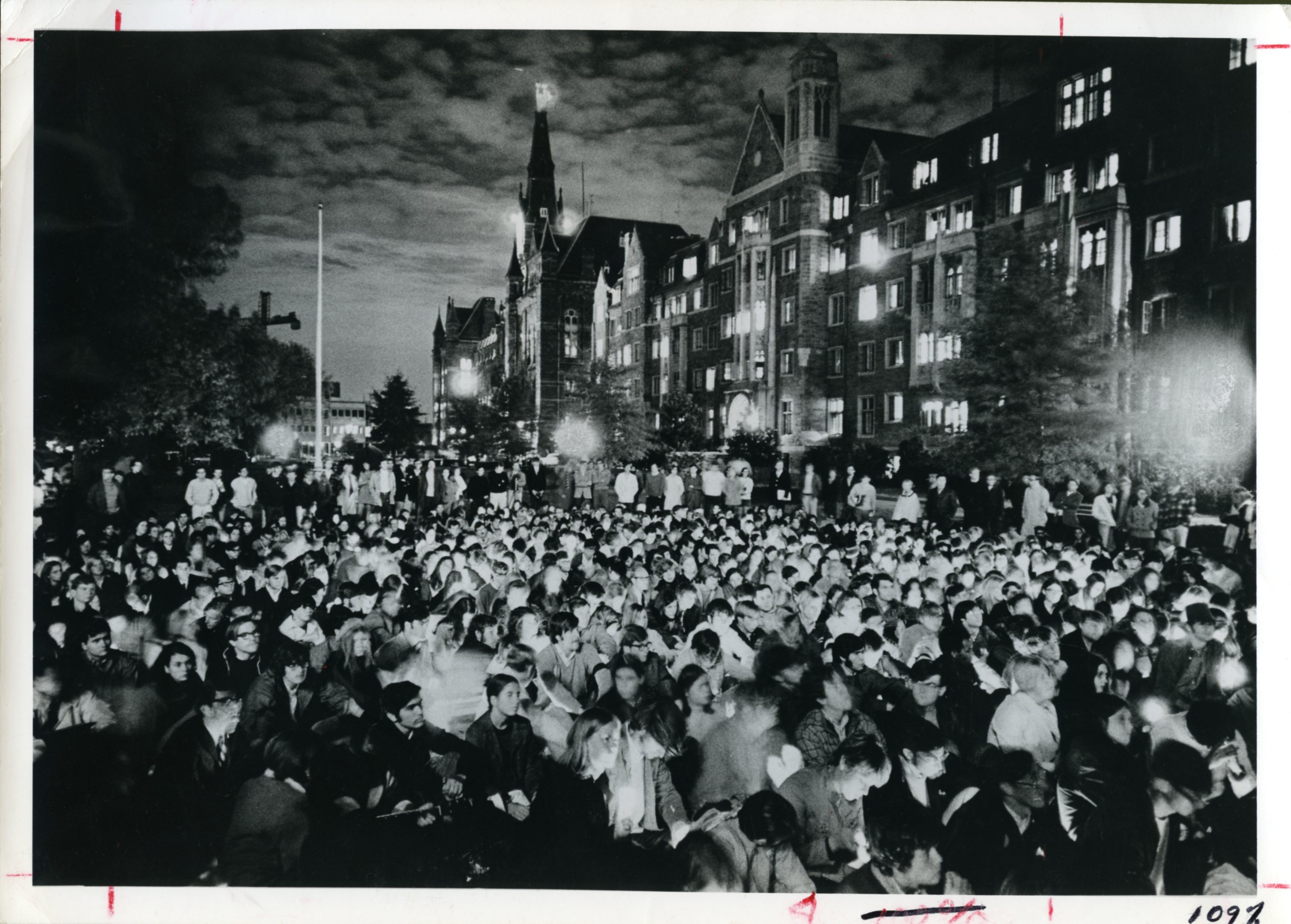 Student vigil held on campus before the National Moratorium to End the Vietnam War, 1969

Note: the Archives holds copies of many student and University publications, some of which might only be one-offs or incomplete runs. These publications may contain relevant information about student activism and the University's response to activism efforts on campus even though they are not listed below. Researchers are strongly encouraged to check with staff for more individualized assistance.

The Hoya: One of Georgetown's current student newspapers which began publication in 1920. This paper contains a lot of information about everyday student life, events and University administrative decisions, among many other topics. Student activism efforts are well documented throughout this paper. The University Archives has print copies from 1920-2020. It is also digitized from 1920-1939 and 1959-1980. More current digital issues can be found on The Hoya's own website.

The Georgetown Voice: One of Georgetown's current student newspapers founded in 1969. The Voice was founded in response to what the founding editors saw as The Hoya's lack of coverage of the Vietnam War and of the many issues facing students outside of Georgetown. The Voice tends to feature more in-depth articles rather than covering the minutia of everyday campus life like The Hoya, although social issues are well covered. Print copies are available in the University Archives (no digital copies yet), but digital copies of issues going back to January 2001 are available on The Voice's website.

Georgetown University Yearbook (Ye Domesday Booke): The content in the yearbooks varies a lot over the years but they are typically a good record of student life on, and sometimes off, campus. Photographs of student protests can be found here along with essays in select years. The yearbooks also document, very basically, student organizations. The yearbook has been digitized from 1901-2011. Print copies up to 2018 can be found in the University Archives.

The Fire this Time: Billed as a newspaper for African-American students and students of color, The Fire This Time began in 2000 as a way to empower students of color by giving them a platform to share important information and views following two hate attacks against students of color. The title continues to be published as an online magazine.

The New Press: The New Press was founded in 1988 as a way to bring greater attention to women’s issues and would later expand to include gender issues more broadly.

Georgetown Today and Georgetown Magazine: University publications aimed at Alumni that would occasionally report on student protests and activism.