This guide will introduce researchers to history of student activism on campus.

Brief History of Activism on Campus

Georgetown students have long engaged in activism efforts. Materials in the University Archives dating back to the mid-19th century documents actions of the student body to protest what they perceived were unjust actions by University administration. And while much of the protests in the 19th and early 20th century focused on bad food or lack of holidays, the advent of the 1960s ushered in a new era of student activism; one in which students joined the fight for civil rights and anti-war efforts. From then on, Georgetown students have readily mobilized to call attention to the injustices they see around them and  have used their voices to affect change in areas of racial, social and environmental justice; from ongoing civil rights and anti-war movements to fair labor practices, protests against University policies or tuition hikes, LGBTQ+ rights, the Black Lives Matter movement, women's equality, and student efforts to institute a fund to support the descendants of the GU272, among many others.

Below is a brief timeline of student activism at Georgetown, beginning in the 1960s. This, of course, is not an exhaustive timeline, and researchers are encouraged to use the University Archives to dive deeper into all of the various student activism efforts at Georgetown over the course of more than 225 years. 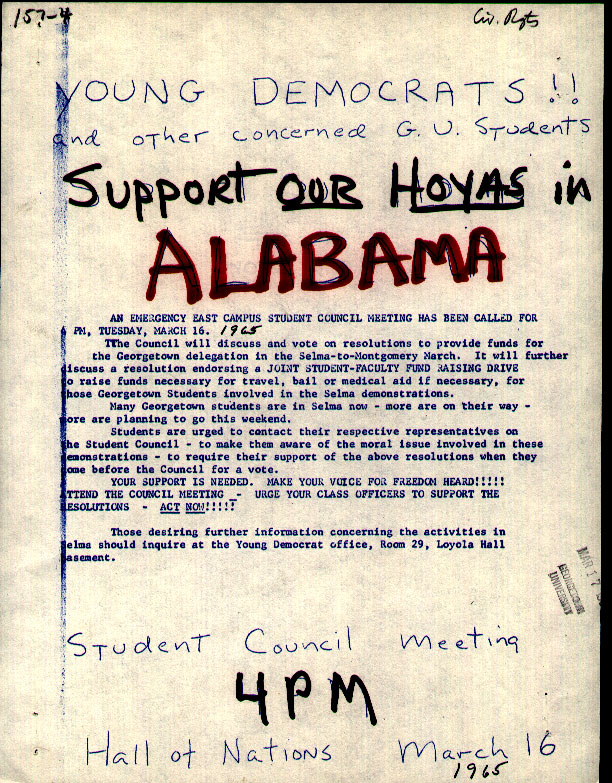 delegation traveling to Alabama for the Selma to Montgomery March, 1965

February 1963: 15 Georgetown students stage a sit-in at the Gateway Diner in Alexandria, VA after a black student was previously told to leave.

March 1965: Georgetown students travel to Selma, Alabama to attend the memorial service for the Rev. James Reeb, who died following an attack by four white men, and take part in demonstrations.

October 1969: Georgetown students participate in the protests over the building of the Three Sisters Bridge across the Potomac River, which would have displaced thousands of predominantly black families from their homes.

May 1970: Following the Kent State shootings, Georgetown's Student Senate votes to strike from classes in solidarity with other colleges and universities across the nation in protest of the escalating Vietnam war.

March 1972: Students of Georgetown, Inc. (The Corp) is formed as a direct result of the May Day Riots of 1971. The new entity would allow for the student body to sue the University for injuries suffered after the University President permitted the Metropolitan Police Department to forcibly clear campus during the riots.

April 1986: The Student Coalition against Apartheid and Racism staged a two-week sit-in at White-Gravenor to continue the 1985 protests against apartheid in South Africa and demand divestment of University holdings in companies with financial interests there. The Georgetown Board of Directors voted to divest its roughly $9 million in holdings in September 1986. 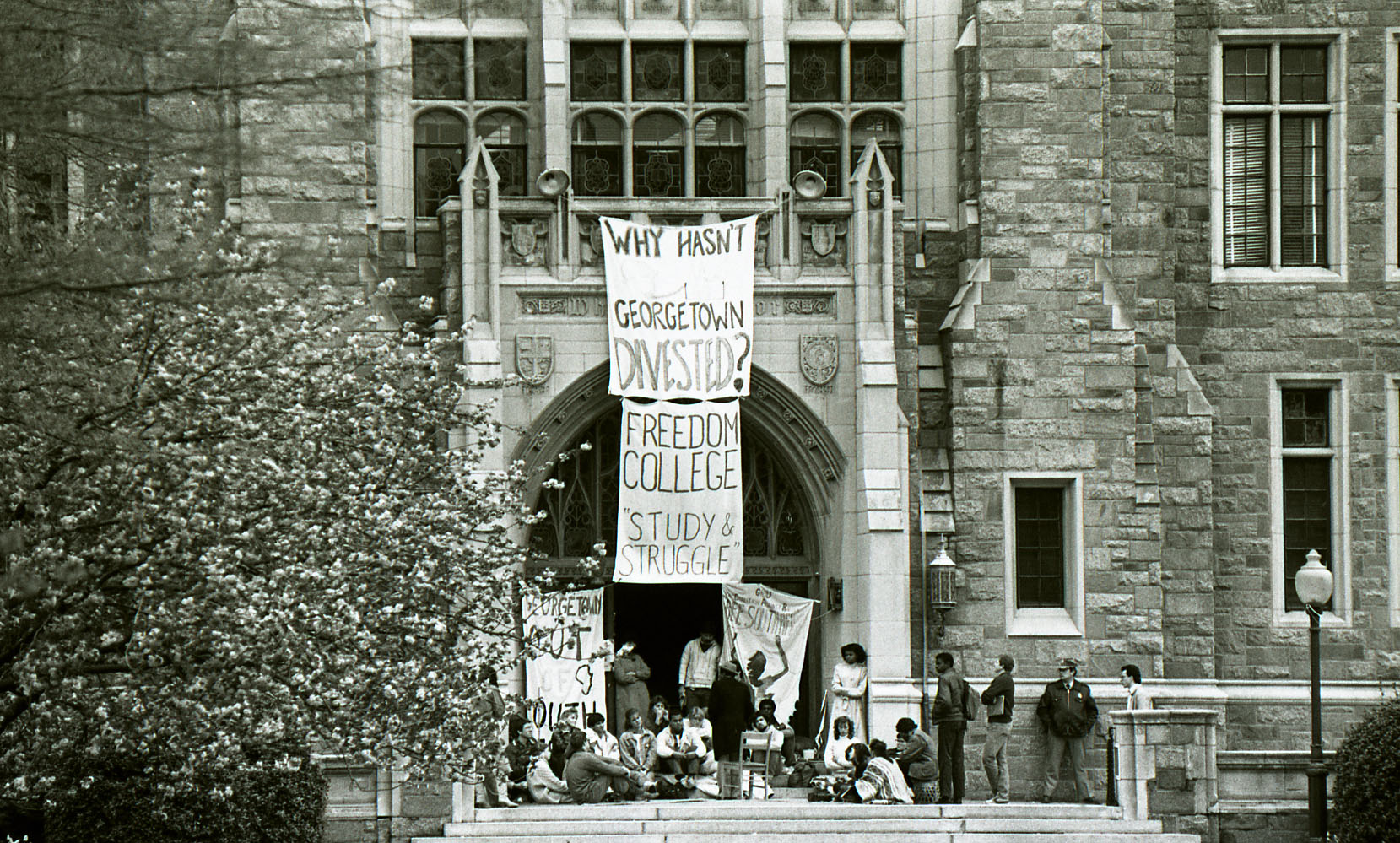 March 1993: Students take part in protests on campus and in DC to raise awareness on the U.S. policy of detaining Haitian refugees at the military base in Guantanamo Bay, Cuba.

March 2003: The Georgetown Solidarity Committee launches a living wage campaign and publishes a report highlighting the lack of a living wage for University employees.

Fall 2007: Students of GU Pride and the Georgetown Solidarity Committee organize the Out for Change Campaign after several incidents of on campus assaults against LGBTQ students. The actions of the Campaign helped bring about the establishment of the LGBTQ Resource Center in 2008.

April 2014: Take Back the Night organizes a week of events to highlight issues of sexual assault and gender equality.

April 2019: Georgetown students vote in favor of a referendum to establish a fee that would support a fund to benefit the descendants of the GU 272. The GU 272 Advocacy Group led a months-long outreach campaign on campus generate support for the referendum. In October of 2019, University officials announced that, in lieu of implementing a fee, a reconciliation fund of $400,000 would be created to support the descendant community through community-based projects.