This guide will introduce patrons to the material held in the University Archives that documents the history of the LGBTQ community at Georgetown.

LGBTQ Materials in the Archives

The University Archives continues to actively collect material related to the LGBTQ community on campus. Anyone who may have materials that document the history of the LGBTQ community and activities on campus are encouraged to donate materials to the University Archives for permanent preservation. Feel free to reach out to Archives' staff for assistance in transferring materials or more information about the preservation services we provide.

Newspaper ad for the Dignity Mass Service held on campus, 1976

Note: Collections that are digitized or that have an online collection guide (finding aid) are linked.

University Archives Reference Files: These files serve as a starting point for research on a given topic. They contain photocopies of things like news clippings, photographs, correspondence, and other materials to give you a broad overview of what is available in the Archives for that particular topic. Beginning with the reference files can help researchers narrow down their topic of study.

LGBTQ Resource Center Archives: This collection contains records of the LGBTQ Resource Center dating back to 2008 with a strong focus on events hosted or sponsored by the Resource Center like Lavender Graduation, Pride Week and OUTober. Other materials document the Out for Change campaign and the founding of the Resource Center, the LGBTQ Working Group, on-campus resources for LGBTQ students, the Journeys Retreat, safe zones, and copies of the annual Attaché report on LGBTQ life at Georgetown, among others. Also included are materials collected as part of the Center's History Project, which documents the formation of early student groups in the 1970s, the lawsuit filed by the Gay People of Georgetown University (GPGU) and the Gay Rights Coalition (GRC) against the University for official recognition and funding, and materials related to GU Pride and the Gay and Lesbian Alumni/ae Association of Georgetown University (GALA). This collection includes both physical and digital records.

President's Office Records: Administrative records from President Timothy S. Healy, S.J.'s tenure that cover the GPGU and GRC lawsuit from the 1970s-1980s. Permission to access these records must be given by the President's Office. Be advised that records covering President DeGioia's time in office, as well as his time as Dean of Student Affairs, have not been transferred to the University Archives.

Student Handbooks: Produced by the Office of Student Affairs (later Student Engagement), the handbooks track the evolution of University-recognized student groups as well as on-campus services available to students.

University Archives Poster Collection: This collection contains posters or flyers for campus events, including those hosted by student organizations. These are organized chronologically from the 1960s-2015.

University Archives Photographic Collection and the University Photographer's Files: These collections contain prints and negatives of various people, places, and events from roughly 1850-2004. 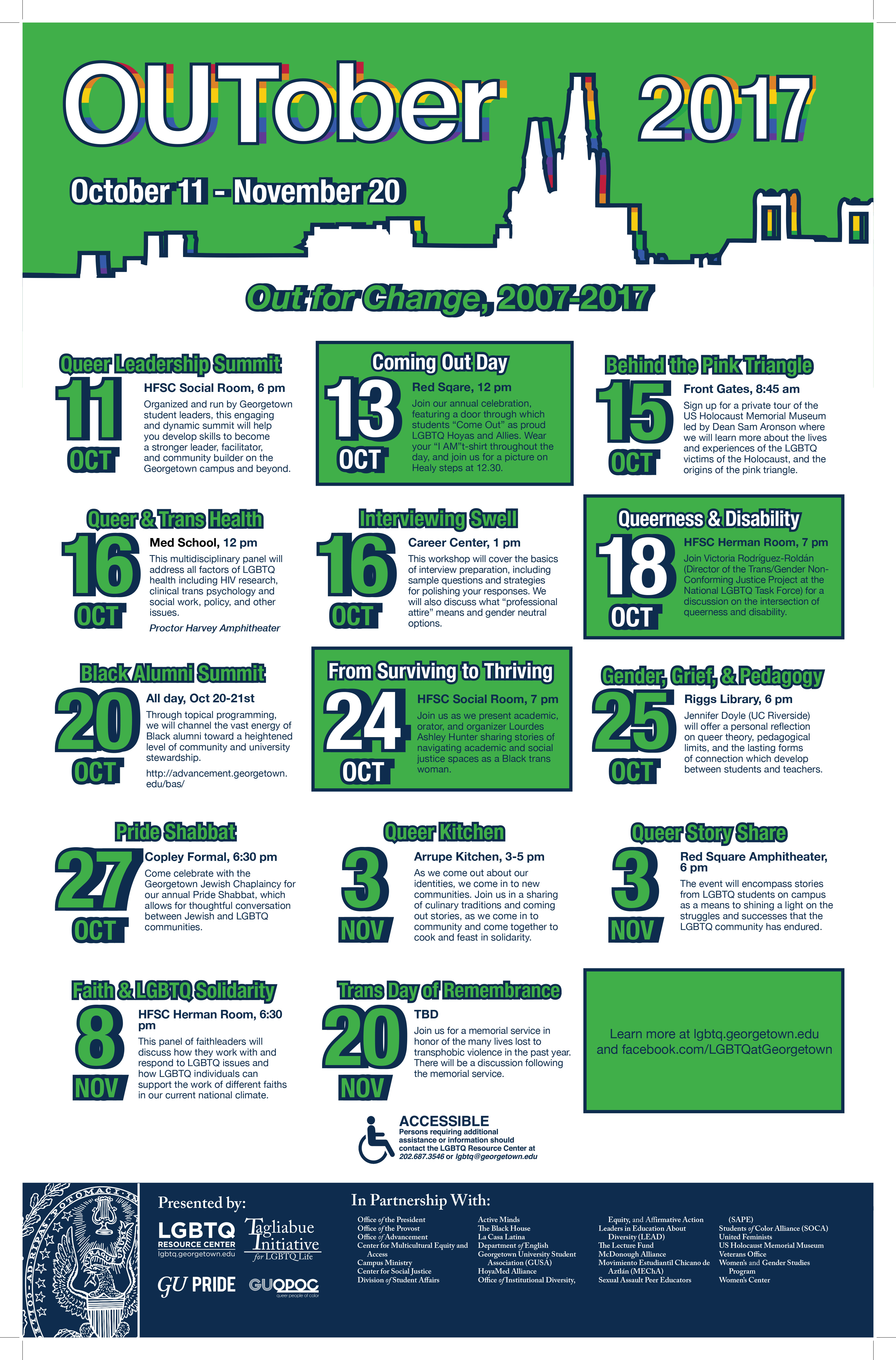 The Hoya: One of Georgetown's current student newspapers which began publication in 1920. This paper contains a lot of information about everyday student life, events and University administrative decisions, among many other topics. Early efforts by the LGBTQ community are well documented, including the fight for University recognition and funds by several student groups in the 1970s and 1980s. Events leading to the creation of the LGBTQ Resource Center and the ongoing work of the Center are also well covered. The University Archives has print copies of The Hoya from 1920- early 2020. It is also digitized from 1920-2000 (via the link in the title). More current digital issues can be found on The Hoya's own website.

The Georgetown Voice: One of Georgetown's current student newspapers founded in 1969. The Voice tends to feature more in-depth articles rather than covering the minutia of everyday campus life like The Hoya. Early efforts by the LGBTQ community and the work of the LGBTQ Resource Center are also documented here. Print copies are available in the University Archives (no digital copies yet), but digital copies of issues going back to January 2001 are available on The Voice's website.

Georgetown University Yearbook (Ye Domesday Booke): The content in the yearbooks varies a lot over the years but they are typically a good record of student life on, and sometimes off, campus. Student organizations are documented throughout and some coverage is given to the lawsuit brought forth by the Gay People of Georgetown University (GPGU) and the Gay Rights Coalition (GRC) for University recognition and funds in the 1970s and 1980s and the creation of the LGBTQ Resource Center in 2008. The yearbook has been digitized from 1901-2011 (via the link in the title). Print copies up to 2018 can be found in the University Archives.

Georgetown's Blue and Gray: Publication produced by the Blue and Gray Association, a student-run independent non-profit corporation with a focus on constructive criticism of policies and programs at Georgetown. Some issues include articles on the GPGU/GRC lawsuit. Print copies of the publication from 1987-1989 are available in the University Archives.