This guide is intended as a starting point for finding research materials relating to the impact of the Civil War on what was then Georgetown College. 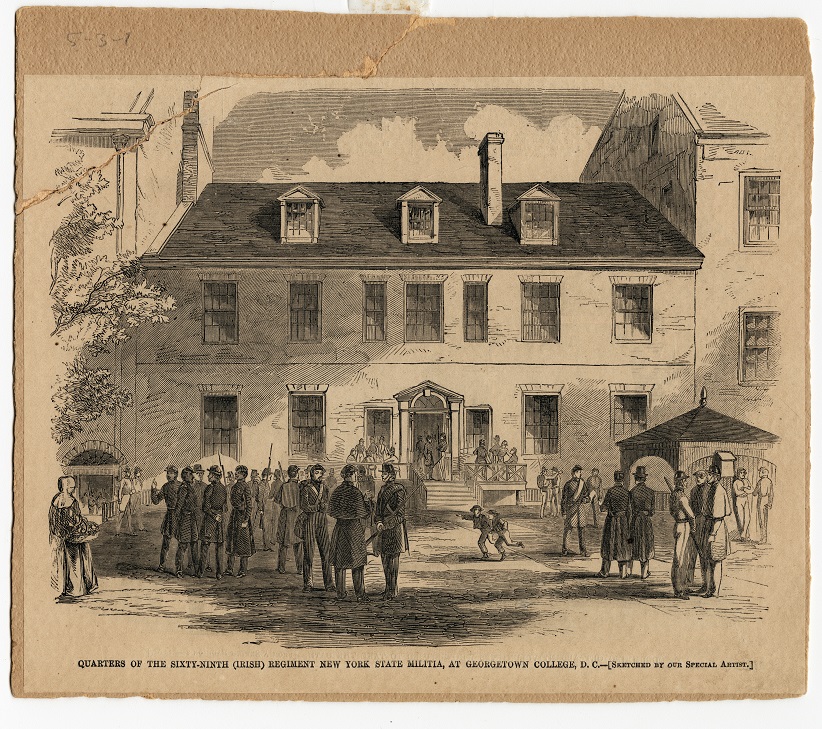 The Civil War is probably the most serious threat Georgetown has faced to date but despite occupation, use as a hospital for around eight months, financial difficulties caused by a severe drop in enrollment and subsequent loss of tuition revenue, and concerns over being identified with the Southern cause, Georgetown was able to survive and resume normal operations at the conflict’s end.

The list below, while not intended to be exhaustive, presents some key events in chronological order. Information about events highlighted (as well as events omitted) can be sought in the University Archives.

John Early, S.J, becomes president. He serves until 1865, resolutely guiding Georgetown through the challenging years of the Civil War

Philodemic Society debates the question: Should the South Secede? on December 18. The situation becomes so heated that a fight breaks out and meetings of the Society are suspended for the rest of the academic year to prevent any recurrence

Jesuits in the U.S. are forbidden from voting in the Presidential election by  the Superior General of the Order in Rome, so they cannot be viewed as in any way expressing political opinions

Classes are cancelled on January 4, as the College participates in a national day of fasting and humiliation proclaimed by outgoing U.S. President James Buchanan in an attempt to avert the imminent evils from the Republic

Students begin to leave campus in January in anticipation of war

Medical Department, fearing that Lincoln’s inaugural on March 4 might spark riots, requests permission on February 18 to copy the record of decrees awarded to its students since its founding in 1851. The request is made out of fear this information could be lost if the Department's building, then at F and 12th Streets, N.W., is damaged

Members of the senior class present a petition to the College President, asking for permission to leave campus and return home on April 10. They are subsequently allowed to graduate without further studies if they wish

Secretary of War sends the 69th Regiment of the New York State Militia (known as the Irish Regiment) to be billeted on campus on May 4. Around 1400 strong, they stay a month. President Lincoln reviews them on May 8, accompanied by Secretary of State William Seward and Secretary of War Simon Cameron. The College is given less than 24 hours notice of the 69th’s arrival and the 60 or so students who still remain have to quickly move out of the buildings on the south side of the Quadrangle (Gervase Hall, Isaac Hawkins Hall, the South Building and Maguire Hall.) These are turned over to the Regiment and College operations contract into Old North. The 69th move west to join forces in Virginia after 3 weeks

79th New York (known as the Highland regiment) arrive on June 4; they stay for around a month before also moving west

Commencement is held on July 2. The ceremony takes place without an audience and lasts less than twenty minutes

Students on campus are able to hear cannons being fired during the First Battle of Bull Run, July 21

Buildings on the south side of the Quadrangle, as well as the College’s villa in Tenleytown, are requisitioned by the Government to provide hospital  accommodation on August 31. Campus does not return to the College’s control until February 1863

Given its financial difficulties, the College is only able to fabricate the silver medals traditionally awarded to students for academic achievement at commencement by melting down the silver spoons of students who have left

Aaron Edmundston, likely the last slave to work on campus, leaves in March. On April 16, the Compensated Emancipation Act comes into effect in D.C., nearly nine months before the signing of the Emancipation Proclamation, and ends slavery in Washington by paying slave owners for releasing their slaves

Medical Department establishes a chair of Chair of Military Surgery, Physiology and Hygiene at the suggestion of the Surgeon General U.S.A. on February 2.  This chair is the first of its kind in the nation

Combination of reduced income and inflation forces an increase in fees for tuition, board, lodging and laundry, the first in forty years. Fees increase from $200 per year to $325

Philosophy professor, John Guida, S.J. is mistaken for  John Wilkes Booth and  arrested in the aftermath of President Lincoln’s assassination. He is held in a military camp in Virginia until the real John Wilkes Booth is located on April 26 at Garrett’s farm in Caroline County, Virginia. David Herold is captured at the same time

338 students enroll at the beginning of the fall semester, including 75 in the Medical Department. In contrast, only seventeen arrived on campus in September 1861

Stone wall along the eastern edge of campus is completed. Its construction is prompted by rising rates of vagrancy and theft caused by the failing post-Civil War economy

Blue and gray are selected as the colors for the newly formed Boat Club on May 15,  to express the feeling of unity that exists between the Northern and Southern boys of the College

Alumni Association adds a plaque to the porch of Old North on the occasion of the University’s observance of the Civil War Centennial on May 6. It is dedicated to the memory of Georgetown students who served in the War