A guide to bound and single-leaf manuscripts dating from before the mid-18th century in the Booth Family Center for Special Collections, including manuscripts in facsimile and other helpful resources. 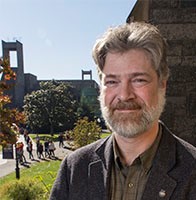 Georgetown’s largest collection of late medieval and early modern documents, the Scheuch Collection, is described below. In addition to that collection, the library possesses early liturgical and theological manuscripts, including some with interesting and sometimes significant miniatures and illumination. Those held prior to 1970 are for the most part listed in Seymour de Ricci’s Census or its supplement, but special note should be made of the volume of spiritual works in Old French (gift of John Gooch) and part of the musical anthology known as the “Scots Psalter” (1586) by Thomas Wode (or Wood) of St. Andrews, possibly from the library of John Gilmary Shea. Also of note are two quite remarkable fifteenth-century manuscripts: one with texts of Bede, Hugh of St. Victor, and others (gift of Ralph A. Hamilton); the other containing works by Henry of Hesse, St. John Chrysostom, and others (gift of John H. Drury). More recently, the collection has grown with two important additions: a truly first-rate manuscript, the Farnsworth Hours, probably illuminated in Bruges about 1465 by Willem Vrelant (gift of Mrs. Thomas M. Evans), and a previously unrecorded fifteenth-century Flemish manuscript of the Imitatio Christi in a very nearly contemporary binding (gift of the estate of Louise A. Emling). The relatively small number of complete manuscripts is supplemented, especially for teaching purposes, by a variety of leaves from individual manuscripts dating from the twelfth to the sixteenth century (in part the gifts of Bishop Michael Portier, Frederick Schneider, Mrs. Beauchamp Hughes, Friedrich von Boetticher, and W. Todd Furniss).

Nearly 250 medieval and early modern documents form the archival records of the Sala family, longtime holders of the castle of Montorroell in the diocese of Vic in Catalonia. An account of the collection (including related documents at the Smithsonian Institution and other depositories), The Sala Family Archives: A Handlist of Medieval and Early Modern Catalonian Charters, by Joseph J. Gwara, Jr., was published in 1984.

A series of 17 manuscript volumes under the general title Magni archivii scriptuarum pro regali jurisdictione regni Neap[olitani], a general history of the Spanish administration of the Kingdom of Naples undertaken for Philip IV of Spain by Bartolomeo Chioccarelli. Never published in complete form, this set was written by several different hands in the eighteenth century.

A substantial volume, bound in the Middle Hill boards of Sir Thomas Phillipps’ library, the collection contains an important series of letters regarding English Catholicism and the 'Popish Plot'. The letters, together with retained copies of answers, are addressed to British diplomat Sir Robert Southwell and concern Edward Coleman (who was unjustly accused of treason by Titus Oates) and a subsequent, but related, controversy with the great Jansenist logician, Antoine Arnauld.

This collection, whose title derives from the house in England where its contents were maintained for almost two hundred years, consists of significant portions of the papers of George Birkhead, Archpriest of England in the early seventeenth century, and of the Belson family, together with a miscellany of letters and documents pertaining in one way or another to English Catholic history between the late sixteenth and late eighteenth centuries. Among the more prominent authors of letters are Cardinal William Allen; Thomas Fitzherbert, agent for the English Catholic clergy in Rome; and Robert Parsons (or Persons), S.J., one of the first Jesuit missionaries to Protestant England.

This collection consists of 43 manuscript texts bound in 15 volumes. They are devoted, with the exception of a treatise on horography, to standard Catholic theological topics. Considerable circumstantial and internal evidence indicates that these volumes reproduce in large measure the theological course of instruction for the English Jesuit college at Liège, Belgium during the period when the earliest Maryland Jesuit missionaries took their training there. Identified authors all taught there during the early eighteenth century. Similar volumes are located among the papers of Jesuits Peter Attwood (who studied, however, in Spain) and his contemporary, Liège student George Thorold.

Digital facsimile of volume 3 of the collection from Digital Georgetown

Directly related to the preceding collection is a group of 62 volumes, mostly early in date, comprising manuscript treatises on a range of subjects: theology and philosophy; mathematics, science, and rhetoric; history, literature, and law; devotional and religious works; and miscellaneous items. For the most part, these derive from one or another Catholic educational establishment before 1800. In large measure they supplement the theological texts in the Jesuit School Manuscripts Collection, and some, at least, may have followed the same route from Europe to the United States.

Digital facsimile of volume 2 of the collection from Digital Georgetown

Digital facsimile of volume 5 of the collection from Digital Georgetown

Not specifically “Jesuit” either in origin or content, the 13 eighteenth-century letterbooks of the Far East section of the Congregatio de Propaganda Fide nonetheless include a good deal of material relating to the Society. Of principal interest are the Congregation’s efforts in China, the Philippines, and South Asia from 1723 to 1745/6, and its role in the significant amount of European fund-raising needed to make the missionary enterprise possible. Two volumes of miscellaneous manuscripts acquired at the same time bear ownership marks from the libraries of the Earl of Guilford and Sir Thomas Phillipps (his Mss. 6451 and 7591); they include such richly various content as an apparently unpublished biography and critical study of Confucius, an account of the martyrdom of three Jesuits in Vietnam in 1737, several items relating to the Chinese Rites controversy, and an undated lengthy Italian text headed “Dissertazione prima sopra l’arte della Pittura.”

The collection in the rare book holdings at Georgetown of modern color facsimiles of some of the greatest medieval and renaissance manuscripts is of nearly equal importance for teaching purposes. It includes not only such standard works as the great books of hours, but also a range of important manuscripts such as the eighth-century Ambrosian Iliad, the Vatican Greek New Testament (gift of Pope John Paul II), the Codex Resta, the De arte venandi cum avibus of Frederick II, the Book of Kells in the Urs Graf Verlag edition, the Domesday Book, and the reproduction of Leonardo da Vinci’s anatomical studies in the English royal collections (gift of John B. Vermylen). These have been supplemented by a second Leonardo facsimile (gift of Henry Nowik), and a number of early facsimiles of Central American manuscripts sponsored by Joseph Florimond, duc de Loubat (gift of Mr. and Mrs. A. Grima Johnson).