Manuscript prayers in Piscataway (detail), written by Andrew White, SJ (1579-1656) in the blank leaves of a published  Manuale sacerdotum

Manuale sacerdotum hoc est, ritus administrandi sacramenta. The printed text is that of a priest's handbook on the administration of the sacraments in Latin. At the front are five pages of manuscript prayers written between 1634 and 1640 in English, Latin, and Piscataway (Conoy), the language of an indigenous people living in the vicinity of present-day Washington, D.C., in the hand of Fr. Andrew White, S.J., the first Catholic missionary to the Maryland colony. Rebound in quarter sheep and paper boards, probably at Georgetown, in the 19th century. Brought from the Jesuit residence at Leonardtown, Maryland, to the University Archives in 1953, it is now part of the Rare Books collection at the Booth Family Center for Special Collections.

The John B. Molloy Collection

Annuae litterae in Latin of the Jesuit mission in the Province of Peru, for twelve years falling between 1591 and 1704. Provide information on number of schools, houses, number of missioners and priests, and the number of students and novices by location. Then follows a detailed report on each college, seat, and residence as well as commentary on work and living conditions. The Province of Peru included parts of what are now Peru, Bolivia, Panama, Ecuador, Columbia and Argentina, with reports on Paraguay and Chile. Because these letters were not those sent to Rome, but were versions that circulated within the Province or were kept in Lima, they will probably not be identical with those found in the Monumenta Peruana.

The collection consists of 20 manuscripts and four printed documents providing a look at physical and economic conditions on the Jesuit reductions, reducciones de Indios, in Paraguay; giving details of schemes to use Indians from the reductions as laborers on military sites in Buenos Aires and as local militia; and outlining the history of Jesuit resistance to pressures brought on them by representatives of the Church and the Spanish government, from the time of Archbishop Bernardino de Cárdenas to the attack by the Redemptorist Miguel de Vargas Machuca almost a century later. The collection is supplemented by two other manuscripts: one a lengthy defense of the Jesuits in charge of the Paraguayan reductions, written by Joseph de Barreda, Jesuit provincial of Paraguay, to the Spanish commissioner assigned to the region (1753), from the collection of Sir Leicester Harmsworth; the other a group of ten diverse documents bound in one (ca. 1760) relating to the activities of the Jesuits in Paraguay in the mid-18th century, formerly in the collection of Sir Thomas Phillipps (Phillipps number 3063).

A bound volume of copies of more than 30 manuscript letters and other accounts dating from 1674 to 1682 and addressed by various Jesuits to Matthias Tanner, S.J., at that time the rector of the Jesuit college in Prague. Of particular interest are letters giving first-hand accounts of Jesuit missionary activities in Paraguay, Brazil, Mexico, the Marianas Islands, Japan, China, Vietnam, Indochina, the Philippines, Lisbon, Austria, Genoa, the Balkans, and elsewhere.

Virgil H. Barber, SJ (1782-1847) was a New Hampshire Episcopalian who converted to Roman Catholicism. Barber joined the Society of Jesus, was ordained in 1822, but did not take final vows. He passed his novitiate at Georgetown University, and subsequently spent time at missions in Claremont, New Hampshire, and Indian Old Town in Maine. Barber also was active in Maryland, Pennsylvania, and Washington, DC.

This small collection contains letters, notebooks, and clippings relating to Barber's work in missions in New England and to his conversion and that of his wife, Jerusha, to Catholicism. Among its items is a bound manuscript containing a prayerbook in the Penobscot (Abenaki) language, dated 1804, by Father Jacques-René Romagné, priest to the Penobscots around 1810-1820. This prayerbook was published in 1834 as The Indian prayer book: compiled and arranged for the benefit of the Penobscot and Passamaquoddy Tribes, a copy of which can be found in the Shandelle rare book collection in the Booth Family Center.

The Francis A. Barnum, SJ Papers 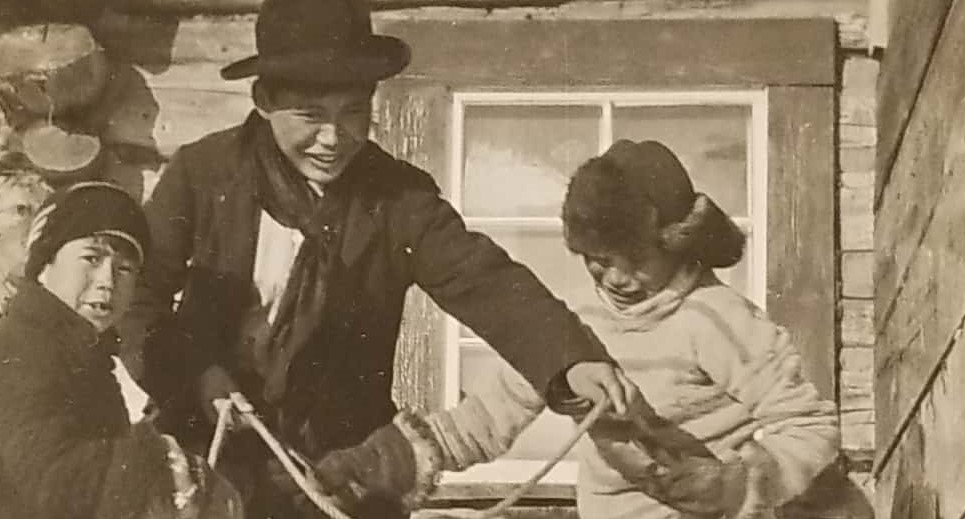 Francis A. Barnum, SJ was born in Baltimore in 1849. Having attended Loyola School in Baltimore and Georgetown College in Washington, Barnum joined the Society of Jesus in 1880 after a period of traveling. After ordination, Fr. Barnum was sent to Alaska, where he spent the better part of the 1890s. While there, he accumulated knowledge of Innuit, a native Alaskan language (now identified as Central Yup'ik). In 1901 he published a grammar of Central Yup'ik entitled 'Grammatical Fundamentals of the Innuit Language as Spoken by the Eskimo of the Western Coast of Alaska' (Boston: Ginn & Co., Publishers, The Athenaeum Press). Fr. Barnum left Alaska in 1898, after which time he served as a chaplain on Ward's Island in New York Harbor, finally settling at Georgetown, where he was made archivist. Fr. Barnum died at Georgetown in 1921.

Fr. Barnum's personal papers include manuscripts and correspondence relating chiefly to his service in Alaska, in Jamaica, and at Georgetown University, where he was educated. The collection includes reminiscences, photographs, and some items collected by Fr. Barnum.