Searching for Other Travel Guides in GEORGE

Currently, there are several types of travel guides, or guide books, cataloged in GEORGE. These materials are located throughout the library, including in General Stacks and Special Collections.

Useful subject searches in GEORGE include:

These subject headings can also be used with a geographic location for more specific results. For instance, there is a collection of city guides for Washington, D.C. that can be easily located with a subject search for Washington (D.C.) -- Guidebooks.

A travel guide or guide book is a book that contains information on geographic location, tourist destination, or itinerary that is usually used by travelers and tourists. [Wikipedia. (2011). "Guide book." http://en.wikipedia.org/wiki/Travel_guide]

A Baedeker is a type of book providing information for tourists visiting a particular country that was originally produced by and named after Karl Baedeker in the 19th century.  [Longman Dictionary of Contemporary English. (2011). "Baedeker."  http://www.ldoceonline.com/dictionary/Baedeker.]

The associated subpage, Baedeker-Uncataloged, contains lists of the Baedeker Guidebooks in this collection divided by region, including North America, Africa, Asia, and Europe--Eastern and Western (further divided by country).

There are currently 40 records that exist in GEORGE for Baedekers. The simplest way to access these records is to perform an Author search for Karl Baedeker (Firm). Also, each of the items in the list below contains a link to the GEORGE entry.

Example of a Baedeker Guidebook 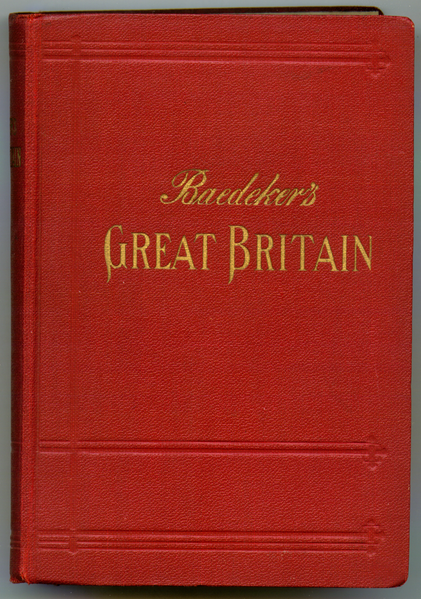 [Public domain], via Wikimedia Commons. This image can be used under the Creative Commons License <http://en.wikipedia.org/wiki/File:BaedekerGB_1937.png>