The B.W. Butler Papers  ( Fifty Years Among the Cheyennes, by George Bent ) 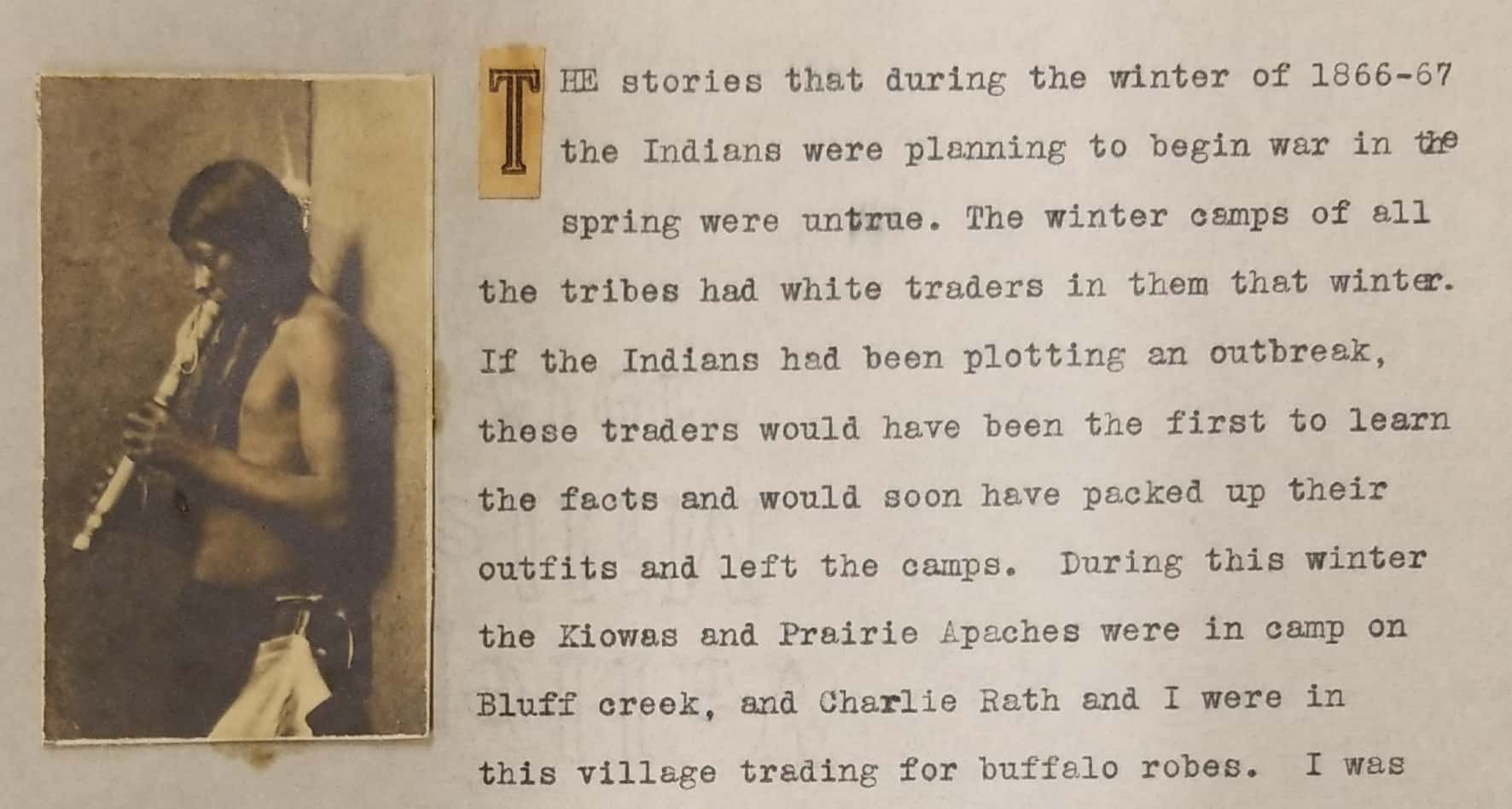 Photograph of an Indian youth playing a flute from Fifty Years Among the Cheyennes, the autobiography of George Bent, edited by George Hyde and B.W. Butler, ca. 1910. B.W. Butler Papers, GTM-180519.

The B.W. Butler Papers, in the University Archives prior to 1970, consist of a single typed manuscript, the autobiography of George Bent, born in 1843 to a Cheyenne mother, Owl Woman, and the St. Louis fur-trader William Bent. While an account of Bent's remarkable life was eventually produced by one of the editors of this work, it remained unpublished for nearly 50 years (Life of George Bent: Written from his Letters. George E. Hyde, editor. University of Oklahoma Press, 1968) while this manuscript, Fifty Years Among the Cheyennes, was nearly forgotten. This manuscript was discovered in a hotel in Washington, D.C. among the possessions of the local lawyer B.W. Butler, who had edited the work along with George Hyde and had been hoping to find a publisher for it at the time of Bent's death from the Spanish Flu during the 1918 pandemic.

Joaquim de Siqueira Coutinho, professor at the Foreign Service School for nearly 50 years, left to Georgetown University these ten handwritten and printed documents in Spanish relating to the administration and taxation of Colonial Peru under Spanish rule. The documents include printed and handwritten proclamations, reports of industrial and trading activity, and more common documents such as receipts and promissory notes, and include references to the Consejo de las Indias, the Tribunal de Cuentas de Lima, and to the Spanish use of the Incan system of mit'a to secure forced labor from the native population. The collection documents the persistence of the exploitative rule of the early Spanish colonizers of Peru in the 17th, 18th, and 19th centuries.

The David Landers Peruvian Collection contains some fifteen autographed legal documents, dated 1566 to 1626, in addition to a listing of hospital patients from 1776. The documents are linked at times by a common witness, or notary public, along with other signatures from those involved in the particular exchange. The Peruvian documents demonstrate the importance placed by the Spaniards in maintaining a written record for a wide variety of transactions during the colonial era. The earliest document from 1566 grants two men the right to represent themselves before a Royal audience with the Viceroy. Other documents record the nature of business dealings: the costs of human labor, whether Indian or African, servant or slave; local entrepreneurship; the dowry for an Indian wife; the prices of mules and wheat; and a property dispute stemming from a convent. The last will and testament of an Indian woman named Antonia Guacana is of particular interest due to the possibility of her being alive during the Conquest of Peru by Spanish conquistador Francisco Pizarro. The document highlights her religious conversion to Catholicism, as well as the need to produce a written testimonial demonstrating her identity as a subject of the Spanish Empire. Another document shows how indigenous labor entailed paying a certain fee, in addition to the teaching of the Catholic doctrine. The hospital listing from 1776 includes the names of eighteen sick patients furthermore indicating which ones died at a later time. Details range from their places of residence to descriptions of their clothing.

The John Mullan Papers contain documents generated and collected by John Mullan (1830-1909), pioneer, military engineer, and attorney, best known for constructing the Mullan Road in the American West. This collection primarily covers his later years as a Washington, D.C. attorney representing California, Nevada, Oregon, and Washington Territory in claims cases against the federal government. Correspondence with high-ranking officials in those states and with state and federal legislators is prevalent in the Mullan Papers, and the Indian War claims and War of the Rebellion claims represent major topics of discussion. A handful of earlier documents relate to his work on the Mullan Road.

The Ord family papers consist of correspondence exchanged between, among others, three family members who were important American military figures. Namely, James Ord (c.1789-1873), an officer in the U.S. Navy for a short time, and later a lieutenant in the army during the War of 1812; his son, Edward Otho Cresap Ord (1818-1883), a noted Civil War general; and his son, Edward Otho Cresap Ord II (1858-1923), who served in the Indian campaign in Texas in 1880, commanded the Seminole Indian scouts in 1882, and served among the first troops to land in Cuba during the Spanish-American war in 1898. The richness of the Ord family correspondence derives not only from the genealogical interest but also from the historical insights provided by the remarkably descriptive writing. Aspects of life in nineteenth-century America - economical, political and social - are described for a variety of locales that span the country from East to West, and include Maryland, Virginia, Mississippi, Michigan, Texas, and California. Particular references are made to the Gold Rush in California and Michigan, as well as to farming and produce (including winemaking in Monterey) in California. Personal experiences of significant events in American history are recounted, covering the Civil War, the Spanish-American War, campaigns against American Indians, and the Reconstruction period.

Not much is known of Archie Wright French. He arrived in Panama from the United States to help work with the construction of the Canal as a white collar worker in 1905 and stayed on with his family after the Canal was completed as a clerical worker in Gorgas Hospital in Ancon, Canal Zone. French worked for the Hospital until sometime in the 1930's, but appears to have remained in the Canal Zone until at least 1945. French compiled 13 scrapbooks of clippings, pamphlets, brochures and typescripts relating to Panama, the Canal and the Canal Zone. He had special interests in the natives of Panama and in the history of the Canal project. An article by French in a loose clippings folder tells of a local festival he attended in Ocu, Panama, and a photo album consists mostly of photos of native (Indian) Panamanians in both Western and traditional dress. Of particular interest are accounts of the San Blas Indians in several articles and pamphlets.